Home | Commodities | Could Chinese Steel Prices be Set For a Fall?

Could Chinese Steel Prices be Set For a Fall?

It seems inconceivable to consider steel prices in China could drop when you listen to the relentless stream of reports detailing China’s robust growth this year and the rude health of its construction and automotive markets, but many were saying the same about equities and base metals just a few weeks back and look at those now.

The argument in the case of steel has been both supply side and demand side. Demand as we have said appears to be robust with little argument from any quarter that China is in for a double digit GDP growth in 2010. On the supply side cost pressure has been intense with iron and coking coal contract prices nearly doubling, spot prices remaining high and supply from India constrained by import regulations banning lower purity iron ore (which will disproportionately impact Indian suppliers) and the looming monsoon likely to impact export volumes.

But the reality, as a Reuters article reports, is something different. The article states Chinese steel prices have remained largely unchanged this last week but our own MetalMiner IndX that tracks daily price movements for domestic Chinese steel markets shows that prices not only reached a plateau a month ago but have even come off slightly in recent weeks. 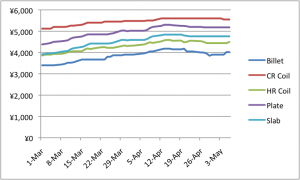 The Reuters article goes on to say concern is widespread that inventory levels are high and although this is typically a period of high consumption, mills are maintaining both production rates and prices in spite of the cost pressures they are experiencing due to rising costs. In fact those rising costs probably explain why mills have not dropped prices significantly to try and win more business. The question remains what will happen going forward. Mills cannot continue to feed metal into inventory and the stagnant prices suggest demand is at best weak. Maybe in spite of iron ore price rises steel prices have gone about as far as they are going to go in Asia for now, much the same as the position back home.

PREVIOUS POST:
When a Steel Company Can be Too Big to Succeed
NEXT POST:
The American Power Act Better Known as Carbon Cap and Trade