The ever resourceful Japanese are scheduled to launch a new form of spacecraft this week destined for Venus that if successful could herald a new era in low cost space travel. The project, run by the Japan Aerospace Exploration Agency (Jaxa), is reported in the FT as being the first interplanetary sail powered space ship. The vessel going by the name of Ikaros (not to be confused with Icarus the mythical Greek character that flew too close to the sun and melted his wings) is an acronym for Interplanetary Kite-Craft Accelerated by Radiation of the sun, according to the Christian Science Monitor yes Ikaros is easier isn’t it! 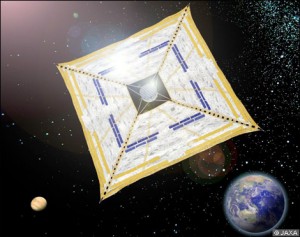 Jaxa’s website says after piggybacking a commercial satellite launch on a Mitsubishi H-2A rocket Ikaros will rotate for two weeks and gradually unfurl a 20 mtr polyamide sail just 7.5um (0.0003) thick, half a human hair, covered with a shiny surface that acts like a mirror bouncing off solar light hitting the surface. 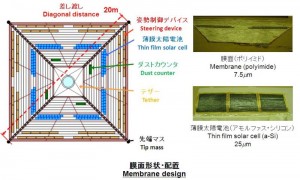 The photons of light exert a pressure on the sail pushing Ikaros as wind pushes a conventional sailboat. In addition, embedded in the sail surface are thin film solar cells just 25um think that use the suns rays to generate power.

Ikaros is expect to take 6 months to reach Venus and should continue to operate for up to 3 years afterward although Jaxa expects to lose contact with it after about a year as it continues on its journey beyond Venus. The project costs a mere US$16m which in interplanetary travel terms is chicken feed. If successful, Jaxa plans to follow up with a second mission to Jupiter later in the decade using a similar but larger sail and a combined hybrid ion drive powered by the solar cells embedded in the sail surface. The dream is if early missions prove successful future spacecraft could be accelerated much faster by the use of high-powered orbital lasers accelerating sail craft to speeds of 500,000 mph.