A cautious Reuters note on the metals market underlines the uncertainty out there at the moment on price direction. A combination of the European sovereign debt crisis and questions over China’s growth profile has caused the metals bull run to falter. The technical boys can’t make up their minds on price direction either as this graph shows. 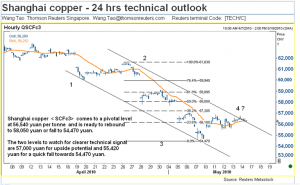 But it was a quote from MF Global analysts Edward Meir that perhaps best summed it up, Metals are very confused. We recommend people sit on the sidelines. China could be the next shoe to drop. A downside surprise from Chinese macro numbers could stir the pot.”

We have written extensively on the debt crisis in Europe, for now it appears to have stabilized the run on government bonds but possibly at the expense of long term Euro credibility. Meanwhile China is going great guns isn’t it? Well yes, may be too great. The authorities are trying to cool what they see as an over inflated property market. The WSJ reports that house prices are officially up 12.8% year-to-year across 70 of China’s larger cities, but our man on the ground says the average rate of property inflation is 30-50% and in some cities prices have doubled. Prices of consumer products are reported to officially have risen by 2.8% in April but in reality prices of grains, vegetables etc are reported to have increased by at least 30%. Gold prices in the domestic market have gone up recently by RMB 27/g to RMB 327/g as people pile into gold fearing inflation is taking off.

Some in the local market are expecting the continuing rounds of bank reserve rate tightening will eventually reign in the market and they will see a property price drop but according to the WSJ, new bank lending was up with $113.3 billion more loans pumped into the economy in Aprilâ€back to around the average monthly level during 2009’s credit bonanza. A bank base rate increase of 1 to 2% expected in the domestic market did not materialize at the end of April and now looks unlikely before June.

Liu Ligang, of ANZ bank, Hong Kong, said in a Financial Times article of the April figures “(they) vindicated our views that China’s economy has already overheated”.

“Virtually everything is on the rise in China, from wages to grain and vegetables, and we expect inflation above 5% by the end of the year,” said Dong Tao of Credit Suisse banking group. “Inflation will be the biggest worry in the second half of this year, and everybody in China except government economists seems to have realized inflation won’t peak in the middle of the year.”

The issue is that unless the authorities get to grips with the problem and act now the action required in 6-9 months time will be that much more draconian, a 1% rise now would have an impact on growth and hence metal demand but it would be modest. A succession of rises later in the year because the situation was accelerating out of control would have a much more profound impact on growth and hence the metals markets.