China's Metal Import/Export Figures Not What They Seem

As always, there is a lot of conflicting data coming out of China. Sorting what is relevant and what is not can be a challenging process.   Let’s face it: China has been the main story in the metals markets for the last few years. Demand up means prices up, demand down means prices fall. But short term price movements can be misleading, sometimes showing an early sign of a longer term trend and sometimes merely reflecting a temporary change in activity. Import and export volumes have been a metric much on the radar of China watchers keen to gauge how strongly China’s economy is really performing and worried that a significant rise in imports will drive prices higher or a surge in exports will be taken as a cooling of the economy and hence drive global prices lower.

Macquarie released a recent report covered in Mineweb which looks at import/export volumes and interprets a slowing in imports as a relatively positive development in terms of price stability. The report suggests that imports of commodities are falling as more material is being sourced from domestic sources and there is also an element of de-stocking going on in the domestic market. The reduction in import volumes is happening at the same time that global demand is recovering so net demand levels are not significantly different, supporting prices current sovereign debt crisis sell-off omitting. The report says the latest production and trade data for April 2010 confirms the trend of a slowing in China’s net imports of commodities. This reflects an ongoing de-stocking in most Chinese commodities the report says, something that started in 3Q09, and also surging domestic production of commodities as imports are replaced with domestic production. Usually a statement such as net imports are falling and exports are rising is a sign that domestic demand is cooling. China was a net importer of aluminum, lead and steel over the first four months of 2009 but now it is a rising net exporter. China’s exports of flat steel products are back at peak levels, driven by a 75 percent month on month increase in hot rolled coil (HRC) exports in April. In zinc, nickel and tin, China’s net imports of refined metal have collapsed from a year earlier.

So, can we use some other measure to gauge the underlying strength of China’s manufacturing activity and better understand if this is truly a cooling of demand, or as the report suggests, a rise in domestic production? Well, one long-time measure is electricity generation.   An investors’ report by Standard Bank said electricity consumption is highly correlated to manufacturing and industrial demand. These sectors tend to be the largest consumers of electricity â€ especially in emerging market economies like China, where the primary and secondary economies contribute significantly to GDP. In China, electricity production grew at an average annual rate of 14.3 percent from 2004 to 2007. At the same time, the Chinese economy grew by an average 10.5 percent a year. China’s electricity demand growth outpaced GDP growth by around one-third in each year. 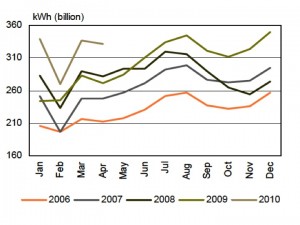 As this graph courtesy of Standard Bank shows, electricity demand has followed the same seasonal trends in recent years, but at progressively higher levels of consumption as GDP has increased. The February dip is Chinese New Year, but the interesting line is the second half of 2008 when consumption collapsed along with industrial activity all over the world. However, since July of last year, electricity generation in China has risen substantially â€ well above levels seen in 2008. Electricity production ended 2009 at an all-time high. This pattern is consistent with China’s GDP data in 2009. Indications are that production during the five months of 2010 was also strong, although there was a small downturn in electricity generation in April (this could be seen as a seasonal drop similar to previous years).

Macquerie partially attributed China’s switch from imports to exports as a sign of supply chain de-stocking. Once complete, the strong electricity generation figures suggest demand could pick up again later in the year supporting prices in late 2010/early 2011.

PREVIOUS POST:
Is China Finally Getting to Grips with Over Capacity in the Metal Sector?
NEXT POST:
US Domestic Steel Collusion Case Will it Change the Sourcing Landscape Part Two