In a recent note to investors on equity investments in the metals and mining segments Credit Suisse made a very interesting analysis as to the relative merits of investments in steel and metals as opposed to mining companies producing the raw materials that go into those industries.

The bank states that commodity demand is back to where it was in volume terms before the crash of 2008. For example in 2007 the world consumed around 18mt copper split 5mt China 13mt ex China. Now its around 7mt and 11mt – same global size very different split. Globally, steel production is back to pre-crisis levels but again capacity under utilization in the west has been compensated by significant new capacity running at higher levels in Asia. 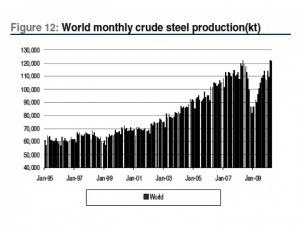 The bank observes that mining is largely a global market whereas steel is a mixture of regional and global. Some specific observations are:

Because steel mills ex China are typically running at only 75% capacity they have limited ability to pass on rising raw material costs. If as expected China returns to steel growth next year this will maintain upward pressure on raw material costs and downward pressure on global steel prices. This will apply for all products where China has a surplus such as aluminum, steel and stainless, the upside for finished metals prices remains limited.

As this graph shows steel prices have consistently underperformed relative to copper prices during the last five years, and producers earnings would reflect this. 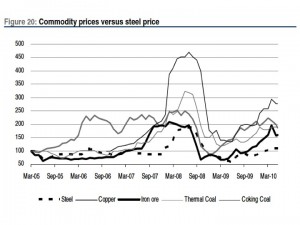 The analysis was run to illustrate the advantages of investments in mining companies rather than steel companies but the conclusions apply equally to probable moves in metals prices. Even if Asian demand drives prices for iron ore, coking coal and so on higher it will not automatically lead to equivalent price rises in finished metal costs. For products like steel producers in the west, suffering from over capacity will be the one’s squeezed but for metals like copper, that are globally priced, price increases will pass directly through to consumers.