ArcelorMittal is said to be looking to exit the stainless steel business within 18 months according to a Reuters report. What you didn’t know that Arcelor Mittal was even in stainless steel? Well no you could be forgiven for overlooking their involvement in the stainless market. We traditionally think of the company as a steel producer, and not just any steel producer but the largest by 100% over their nearest rival. But their stainless operations in Europe and Brazil are sizable and therein lies part of the challenge for the company in devising an exit strategy. ArcelorMittal’s stainless business has been valued at some $3.5 billion to $4.0 billion, based on a sector enterprise value with a forecast 2011 EBITDA multiple of 6.5 to 7 times, against about 5 times for plain steel.

The price, close to the market capitalization of global stainless leader Acerinox, may therefore be prohibitive. Neither Finland based Outokumpo nor German Thyssen would likely be able to afford to buy the business or allowed by Brussels regulators to buy Arcelor’s stainless business because of the dominant position it would give the merged operation. In fact, a buy out is unlikely for another reason the article says, Europe is suffering from over capacity in stainless. Competitors are more likely to hope rationalization takes place before the more choice parts for the group come up for sale.

Perversely after three years of declines, the stainless market has come back strongly and although falling nickel prices have brought supply chain re-stocking to a halt, declining LME nickel inventories suggest demand is continuing at a reasonable rate. However high inventories in China coupled with the usual seasonal slow down are causing concern in the nickel market. While demand is forecast to continue to rise in 2011 it will be at half the rate of recovery we have seen in 2010 according to HSBC. Stainless prices on the other hand are expected to remain weak and possibly fall further. They have already come off since April both in the US and China, as demand for steel products generally has softened and nickel prices have fallen reducing stainless makers costs. 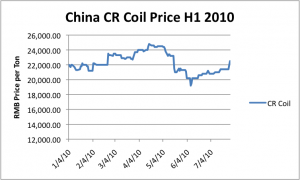 In China, worries are setting in about inventory levels particularly if government inspired cooling reduces stainless demand. Price have come off gradually since the spring as this graph from the MetalMiner IndX shows. The recent pick up is more a result of a 10% jump in nickel prices as this LME graph shows. 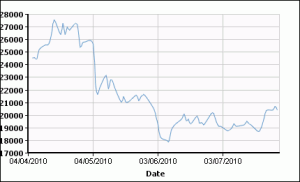 Arcelor’s frustrations with their stainless business though are less to do with low prices and more to do with a failure to fully integrate their operations in Europe and Brazil into a cohesive whole. The division has struggled in the face of industry over capacity, at least in OECD markets, and that isn’t about to improve anytime soon, for Arcelor or any of it’s competitors.