Nickel Well Supported in Spite of an Uptick in Inventories

A Reuters Insider discussion this week included Reuters columnist Andy Homes and Macquerie Bank’s Jim Lennon covering the nickel market and is available for view as a video clip on the Reuters website. The discussion made interesting listening for anyone involved in the nickel market and looking to get a handle on where prices are going during the second half of this year and next.

The discussion was opened with the observation that nickel stocks had been trending lower since the beginning of the year but that in the last four days stocks had increased again and the question was is this the start of a new trend and will it signal a period of weakness in prices? Nickel stocks have dropped by 43k tons this year driven by a static supply market and a massive increase in demand as stainless production has surged 44% by volume. The panelists concluded the uptick in headline stocks is a seasonal development as nickel stocks are replenished with spring production deliveries from Russia. But at the same time, demand is set to soften as the re-stocking surge that had been driving demand comes to an end. The panelists estimated the market to be in the region of 80,000 tons in deficit, a phenomenal amount in comparison to the overall nickel market, equivalent to a one million ton deficit in the copper market.

The question was posed, will the market remain in deficit or will idled capacity such as Vale’s Sudbury and new projects outlined in the table below and shortly due to come on stream push the market into surplus? 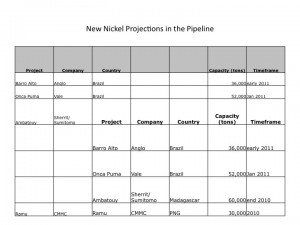 Jim Lennon observed that if they all came on stream at the same time they certainly would push the market into surplus but that in reality some will be delayed so the timescale will be extended over several years. Lennon predicted that second half demand would be weaker and result in a 15% cut in production in the third quarter and a flat fourth quarter. Nevertheless the market would remain in deficit Lennon said as Chinese imports would pick up again following a fall from 186,000 tons in the first half of 2009 to 97,000 tons in the same period in 2010.

Most important, when asked to give a prediction on prices Lennon said he believed the market was supported by Chinese Nickel Pig Iron production which had risen from 50,000 tons in 2009 to 200,000 tons in Q1 of this year. However it is very price sensitive and if prices dropped to $18,000, 75% of that NPI capacity would be idled maintaining a market deficit. At the other end of the scale the market topside he saw at $22,000 per ton and the most likely range at $20,000 to $22,000 per ton through to the end of 2011. That compares favorably with the Reuters poll of base commodities analysts last month that, averaged out put nickel at $20,300 per ton by the end of this year and $21,000 per ton by the end of 2011.