Trends in Aviation, Part One

Two completely different trends are competing against one another within the aviation industry this decade. In neither case will there be an outright winner. One way or the other, the issues are just too complex and the existing technologies, resources and know-how just too deeply entrenched. However, the trends will still have a major and far reaching impact on suppliers.

I speak first of the contest between composites and metal construction in aircraft. In a quest for distance, fuel economy, quietness, and cabin environment supporters could add a dozen more benefits – aircraft makers have poured billions and made huge strides in the use of composite materials in place of aluminum. None more so for commercial applications than Boeing with the Dreamliner 787 that has set the standard (and I don’t mean for delays, that honor is shared with Airbus on the A380) for moving composites from use on the boundary to using them as the primary structure. The process started in military aircraft though, in 1987 the F-15 was constructed from 49% aluminum, 32% titanium and just 2% composites, by 2005 when the F22 entered service it was made from just 16% aluminum, 39% titanium and 24% composites. For commercial aircraft composites, although carrying a higher material and construction cost, are expected to result in lower life cycle operating costs. Many feared the end of aluminum as a major aircraft component when plans for the Dreamliner were unveiled. If this was the way forward for aircraft design then what hope was there for aluminum? Composites natural partner is titanium providing key structurally stressed component strength and with the rise in composite use has been a corresponding rise in titanium use. Titanium use has been on a rise as a result but aluminum consumption is potentially under threat as aircraft makers switch an ever greater percentage of major aircraft components over to composites. Aluminum producers, however are not going to sit idly by and let that happen. For narrow body aircraft such as the rapidly recovering short haul and commuter jet market for 100200 seats, metal airframes still offer considerable benefits, particularly in terms of lower development risks and lower material costs. To counter composites claims of weight reduction and with it lower operating, particularly fuel costs aluminum producers Alcan and Alcoa have been bringing out new alloys which exhibit higher strength properties allowing thinner gauges to be used and saving on weight. Alcan for example has brought out a new aluminum lithium alloy called Airware for use in fuselage skins, stringers, frames and floor beams. The alloy has been specified by Bombardier on its new C Series aircraft aimed at the 100-149 seat market. 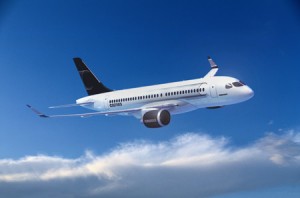 As a result of weight savings, Bombardier is claiming the C Series will emit 20% less carbon dioxide and 50% less nitrogen oxide, fly four times quieter, and deliver significant energy savings 20% fuel burn advantage, as well as 15% improved cash operating costs versus current in-production aircraft of similar size according to a design news article. Other metals are similarly experiencing technological advances that ensure composites do not sweep metals aside, like nanoMag’s liquid-forming process for magnesium sheet which is said to provide 200% higher strength and improved toughness compared to conventional magnesium, while also providing the strength of carbon steel sheet at one-fourth the weight. Metals also have the major benefit of being made from recyclable materials but until aircraft makers and airlines are required like automakers to produce their product with target levels of recyclability they will never place that high on their list of material selection criteria.

We will continue this article as a foll0w-up piece.

PREVIOUS POST:
Scrap Futures – Coming to a Market Near You
NEXT POST:
Trends in Aviation, Part Two