Hungarian Alumina Refinery Disaster – What Exactly is This Red Mud?

We have had lead contamination, mine accidents, and now it is the turn of the aluminum industry to come under the microscope following a major, and we mean major, spill of liquid waste from the Hungarian Aluminum Production and Trade Company (MAL) alumina refinery between Ajke and Kolontal in Hungary. At least four people are confirmed dead, several more missing and over 60 hospitalized.

To be fair this isn’t the aluminum industry as we know it. The plant in question refines bauxite to produce special calcined aluminas and aluminum hydroxides, synthetic zeolites and gallium for sale in central and western Europe for refractories, ceramics and a wide range of aluminum containing chemical reactants. This is not, nowadays anyway, a plant for producing alumina for aluminum smelting.

As you can see in this link the holding ponds are only a short distance from the town of Kolontal, the town that suffered a 6-8ft wave of red mud sludge that surged through the streets and went on to cover an area of some 16 square miles. Although the firm asserts that 98% of the waste has remained in the ponds, it is estimated (a curiously precise) 35.3 million cubic feet have contaminated a wide area. One source puts the volume as equivalent to 440 Olympic sized swimming pools. 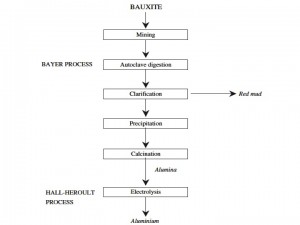 Contamination is an interesting issue, MAL asserts the red mud is just a non toxic by-product of the refining process, produced as the alumina is precipitated out from a caustic soda solution. Reports of acid burning are therefore more likely to be due to high alkalinity – an Australian CSIRO report states that in similar Australian tailings ponds the ph could be up to 11 or more. By comparison Ammonia is 12 and Bleach is 13, so 11 is certainly strong enough to cause intense irritation.

Some articles are suggesting the waste contains heavy metals and is toxic. One report specifically mentions lead as a contaminant but in truth, metals contained are going to depend on the source of the bauxite from which the alumina was refined. One source states the refining process yields three tons of sludge for every ton of alumina produced but a more scholarly piece of research in Turkey suggest the figure is more like one for one and CSIRO’s report suggest more like 2 for 1.

A table of analysis from samples of red mud taken from the Etibank Aluminium refinery suggest the color comes from the high iron oxide content. More disturbingly the report goes on to say the waste can contain thorium and uranium and confirms it can be highly caustic. The majority of the constituents are relatively harmless, iron oxide, aluminum oxide, silica and sodium, titanium and calcium oxides. It’s the minor constituents and caustic ph of this sludge that could prove to be the most dangerous contaminants.

MAL, the operators of the Ajka refinery make much on their website of environmental responsibility and the firm carries certification to ISO 14001, the environment management system. As the Google Earth map above showed earlier, ponds have been gradually covered over and some level of vegetation reintroduced, suggesting that in the long term the sludge may not be damaging to vegetation. Quite why this pond burst on this occasion will be the subject of intense investigation and possibly even criminal proceedings if the management or their procedures are found to be seriously wanting. Meanwhile the Marcal and adjoining Torna rivers have been put on high alert by the Western Transdanubian Environmental Protection and Water Management authority (that’s a mouthful isn’t it) – the Hungarian EPA. But the growing fear is run off will reach the Danube, one of Europe’s major waterways, in which case the effects of this spill could spread the environmental disaster well beyond Hungary’s borders.

Postscript: If you are in the aluminum industry and would like to receive a free weekly aluminum report from HARBOR Aluminum, a MetalMiner research sponsor, click this link to register and your report will be made available to you immediately.

PREVIOUS POST:
Why Gold Is Not a Bubble Market
NEXT POST:
ETF Trends Precious Metals and Other Base Metal ETFs