Many factors impact the price of iron ore, coking coal and similar bulk commodities, but, save for the impact cold weather has on increasing demand for thermal coal, weather isn’t one of the first factors one thinks of as a price driver. However, the current market for iron ore, coking coal and thermal coal has been driven as much or even more by the effects of weather than steel production or power generation.

A recent report by Reuters describes how a prolonged monsoon hindered India’s exports of iron ore, forcing China to look further afield — including Iran, Ukraine and Russia — for supplies. October imports from India stood at 2.91 million tons, down 39% since September and 44% compared with the same period of last year, according to the article, as India’s monsoon season has dragged on for two months longer than seasonal norms. Iron ore in Goa hasn’t had the opportunity to dry out, impacting exports. India accounted for 6.4% of China’s total ore imports in October, down from 9% in September and almost 20% in May, before the monsoon season disrupted shipments. 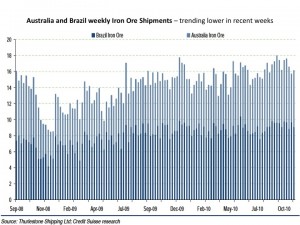 Ore sourced from Brazil rose 3.3% in October to 11.78 million tons, while Australian imports fell 20% from September to 20.72 million tons, as both iron ore and coal exports have been hit by rain. The above graph from Credit Suisse illustrates the decline over recent months. The bank is now going to the extent of posting weekly weather forecasts for the principal iron ore and coal shipping and receiving ports as they feel weather-related issues are proving a significant price dynamic.

As a result of disrupted supplies, the market is getting tight and prices on the spot market have risen steadily, currently standing at $163/ton for 62% Fe.

Nor is thermal coal faring any better than iron ore, with rains taking over 11 million tons of ore out of the Sept.-Oct. markets and continuing to keep supplies tight as markets restock for winter. Only India has benefited in the power production department with late monsoonal rains assisting higher hydro electricity generation. Nor is it just India; Indonesia’s east Kalimantan coal resources have been brought to a halt by incessant rain, and exports from Columbia have been hampered too.

Is the flip side of global warming brought on by burning fossil fuels for power and in industrial activities like steel making that we have more rain? Maybe this is the natural balance being brought back into line wouldn’t that be ironic.

PREVIOUS POST:
What the Great Commodities Sell-Off Means for Metal Prices
NEXT POST:
What Ben Bernanke (and Others) Are Thankful For This Year