In the midst of the TSA hubbub, with countless pundits decrying the security authority’s all-out attack on citizens’ personal freedoms — feeling passengers up, peeping their nude bodies through scanners, breaking urostomy bags, etc. the country’s Libertarian party mourns the loss of their co-founder, David F. Nolan, who died recently in Arizona at 66.

Nolan counted personal freedom among one of the cornerstones of his political philosophy. He created the Nolan Chart, which turned the traditional left-or-right liberal/conservative spectrum on its head by placing “personal freedom issues along the “Y” axis and economic issues along the “X” axis, creating a two dimensional chart that analyzes a person’s political viewpoint in a far more valuable way, according to nolanchart.com, an online forum “for commentary from all over the political map. A more advanced version of the chart, reworked by the non-profit organization Advocates for Self Government, is shown below. 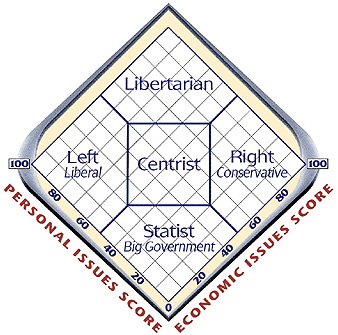 (*Find out where you lie on the political spectrum — Take the Nolan Chart Survey Here.)

Most interestingly for us, Nolan and his friends sprang into action after a certain speech in the early 1970s. From Nolan’s Washington Post obituary: “The impetus for the new party was a national address by President Richard M. Nixon on Aug. 15, 1971, Emma Brown writes. “U.S. currency would no longer be pegged to the gold standard, Nixon announced, and the federal government would institute new wage and price controls to curb inflation.

As gold prices soar while the near- and medium-term future of the dollar remains uncertain, the circumstances of the Libertarian Party’s birth seem very prescient. Few share Ben Bernanke’s view that inflation won’t rise considerably after the Fed’s second round of quantitative easing.

In that same decade, it’s no small coincidence that economists divided into the monetarists and Keynesians. This led to a split in thinking about how the government should interact with the economy. A recent article in The Economist lends more credence to the libertarian viewpoints of Austrian economist Friedrich Hayek, whose business cycle pointed out that low interest rates lead to wasteful capital allocation. Nolan’s party took up wasteful spending as a banner issue back then; the issue continues to surge today.

Personal freedoms and self-government, the latter being heartily co-opted by the Tea Party arm of the Republican Party lately, factor heavily in the growing sentiment that certain institutions (the White House and the Fed, for example) have irrevocably overextended the role and responsibilities of our federal government and, ultimately, over-leveraged it.

Nolan’s “third way of thinking has certainly, if anything, furthered the quality and focus of political discourse in this country. That doesn’t translate, not even remotely, into election wins (Nolan gained just 5 percent of the vote when he ran as a third-party candidate for U.S. Senate against John McCain this year), but that “winning now is not necessarily a core libertarian principle. “A third partyÂ¦can take a long-range approach – running candidates with no intention of immediate victory, he wrote in 1971, according to the Post.

Some might say Nolan envisioned a perfect marriage of the best intellectual thinking with the most practical-minded economic philosophy. This is evident when quotes such as the following display a marked absence of cutthroat rhetoric (to which both Republicans and Democrats are not strangers), instead lodging an idealistic call for rationality:

“There’s a surreptitious hope that [the major parties] adopt some of our ideas and put them into practice,” Mr. Nolan, quoted in the Post as saying on the 30th anniversary of the party’s founding. “Even if we didn’t get credit for them, they would be changes for the good, and we’d like to see them in our lifetime.”