Robots Gain Widespread Use On Battlefield…And With Your Local PD

We have become accustomed to names like Predator, Reaper and Global Hawk as labels for the growing array of remotely controlled aerial drones used in the modern battlefield. Whether it is because of some controversial loss of civilian life or a celebration of success in tracking down insurgent operatives, the use of robotic drones has become widespread and looks set to grow much much further. It should be no surprise then that the use of robots in land wars is, somewhat more quietly, growing just as fast. The US government has been actively working on projects since the 1990s and began rolling out applications not just for the US Army but for security forces including 150 police departments.   A NY Times article says the military now routinely uses more than 6,000 tele-operated robots to search vehicles at checkpoints as well as to disarm one of the enemies’ most effective weapons: the I.E.D. (or improvised explosive device).

New versions are coming in all shapes and sizes, from six-wheeled load carriers that will follow a soldier across rough terrain and carry up to 1000 pounds of kit, to our favorite, small 1.5 pound models used for reconnaissance in buildings called the Throw Bot, developed with an $8 million grant from the Department of Defense and in cooperation with the University of Minnesota, according to a WSJ article. The name comes from the fact it can be thrown into action through a window or over a wall, or even — the makers DMA Defense claim — dropped from a three-story building or from a passing drone! 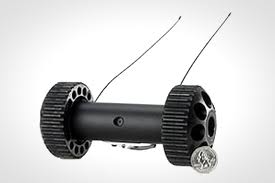 The Throw Bot is made from aircraft-quality aluminum and titanium with cast urethane wheels. (The above image is courtesy of the manufacturer, DMA.) The small infrared camera sends back images real-time to the operator up to 100 feet away, allowing a view inside a building being occupied by some hostile or otherwise potentially dangerous individual(s). The batteries last a couple of hours, plenty long enough for most recon operations and, if not, just throw in another one. Needless to say the Throw Bot and his kin have to be remarkably robust, apart from being thrown or dropped into action they may have to withstand small arms fire or grenades. According to supporters one of the strongest features of robotic battlefield weapons is they don’t have to shoot first giving operators of robots that are armed (Throw Bot is not) more time to judge friend from foe and avoid civilian casualties. Nevertheless, to survive they have to withstand all manner of abuse if they are to fulfill their mission.

As battlefield robots are more widely developed and become better armed there will increasingly be calls for rules of engagement to be developed alongside their deployment. In the meantime, designers in this particular field of engineering will be able to engage any residual childhood fascination with robot toys to their hearts’ content. This particular technology has a long way to run.