Home | Commodities | Where Is All This Aluminum Coming From?
Commentary, Market Analysis

Where Is All This Aluminum Coming From?

The rumor machine is in full swing as to what is happening to aluminum inventories. As a Commodities-now report advised last week, a total 342,000 metric tons of aluminum were delivered into the LME system and the headline stocks figure rose by a net 250,575 tons last month. That negated much of last year’s 350,000-tonne decline and at first sight suggested the market must be awash with metal. 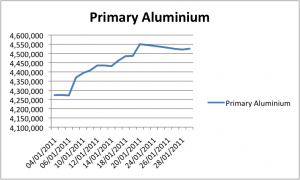 But if that were the case, physical premiums would be collapsing as suppliers fought for buyers in an oversupplied market. In practice, Reuters reported the premium for duty paid metal in Rotterdam was still US$ 190-210 per metric ton over LME cash, steady with the level seen in the final quarter of last year of US$ 195/ton.

So one explanation could be that this is a reverse flow of what we saw last year, namely a gradual draw-down of visible LME stocks with a build-up of off warrant stocks in cheaper non-registered warehouses. But why would metal flow back into LME warehouses when they are renowned for being more expensive? Melanie Burton at Reuters suggests the long-term finance deal is dead anyway, as the 3-month forward premiums for aluminum have shrunk from US$45/ton last year to about US$12/ton this year; see graph below from the LME. 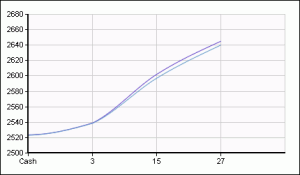 US$12/ton does not leave enough headroom to cover storage, insurance, finance and see a profit. One warehouse source is quoted as saying it costs $12/ton per month to store metal in an LME warehouse. Even allowing for the steepening of the forward curve 12 months out, the premium is still insufficient to cover the costs if stored at headline LME-approved warehouse rates.

One theory doing the rounds appears to be that the movement into LME-registered warehouses has more to do with the new owners moving their stock into their own premises. Vlissingen’s LME warehouse saw a near four-fold rise in inventory to 246,000 tons this year following the purchase of Pecorini Metals by Glencore last September. Other large banks and traders such as Goldman Sachs and JP Morgan Chase also purchased LME-approved warehouse firms last year and some of the movement may well be a decision to keep the rent outlay in-house rather than with a third party.

Nevertheless, the question remains what will happen to inflows of metal from a market that is widely considered to still be in surplus if the finance deals are no longer viable to soak up new production. The answer, as so often in the metal markets, lies in China. The markets are closely watching what is happening to SHFE inventories and Chinese smelter production; both have been falling this year. The SHFE news commented just prior to the New Year close-down that they expected demand to rise after the holidays, but smelters’ output would not immediately follow causing further rises in prices and draw downs in inventory. Macquarie Bank reported a big draw-down in mostly off-market inventory in China during H2 2010 to the tune of 870,000 tons. If smelters are encouraged to come back on stream, price rises may be reversed but if not (and the arbitrage window between the SHFE and the LME opens), then imports could result. That at least would find a home for production elsewhere that earlier would have been destined for finance deals or roll-overs. In the meantime, falling SHFE inventories may be the only dynamic supporting recent rises in the aluminum price — how long it lasts remains to be seen.