American Industry Through the Lens of Margaret Bourke-White 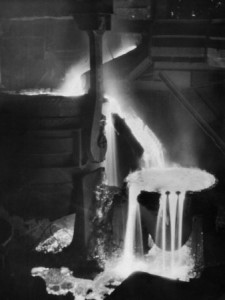 One week ago, I went down to the Art Institute of Chicago on the last day of their Free Winter Weekdays. I only had a couple hours, and quite frankly, couldn’t bring myself to leave the basement level, where modern photography is on display. The striking monochromatic work of Margaret Bourke-White proved how artists/journalists and industry can make beautiful art together.

Born in the Bronx and raised in New Jersey, Bourke-White opened a commercial photography studio early in her career, and one of her first clients was Otis Steel Company in Cleveland, whose stacks are shown below. 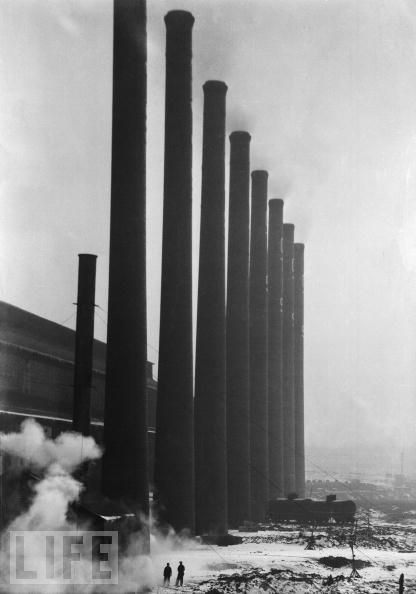 Thus began her love affair with the images of American machines, products and factories, and by the end of the 1920s, she was working on assignment and on commission for advertisers, corporate executives and magazine publishers. According to the Art Institute exhibit, her use of “graphic dynamism and sharp angles” earned her the nickname “photographer of dynamos, allowing her exclusive access into the sprawling factories of Chrysler and Ford. 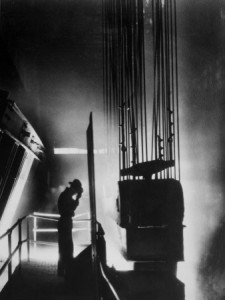 Henry Luce, publisher of Life and Fortune magazines, signed her to a contract in 1930. (The photo on the first Life cover, incidentally, was Bourke-White’s). Through her connections with those magazines, she was the first photographer allowed to shoot industrial scenes in the Soviet Union.

Ever the free spirit, however, Bourke-White frequently broke her Fortune contract and took gigs with other magazines commissioned by commercial operations. One particular shot, taken in 1933, grabbed my attention. 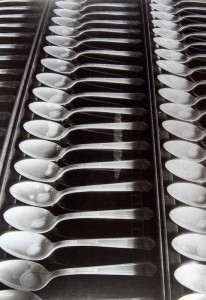 The title of the piece and the company that commissioned it is International Silver, and it shows one of her strongest suits. “Bourke-White lit the objects specially to enhance their luster, the museum description reads. “She was known for imparting glamour to the products of industrial America, counteracting the Depression’s radical impact on consumer spending.

Although today’s steelworkers and other manufacturers may be hard-pressed to define the “glamour in their industry, or fear that the rest of America has forsaken their efforts, pieces of art like these at the very least call much-deserved attention to their hard work and sacrifice.

More on the Margaret Bourke-White Collection at the Syracuse University Library here.

PREVIOUS POST:
Japanese Steelmakers' Merger A Taste of More to Come
NEXT POST:
Physical vs. Futures Investment, With Copper ETFs As Primary Example