Not to be confused with its nearly homophonic cousin that connotes monetary child support post-divorce, antimony, the minor metal used in flame-retardants and microelectronics, has been showing remarkable movement upwards lately. Prices are up 230 percent since April 2009, says Reuters, when fears of depression forced inventory supplies to dwindle. (That is the dip you see in the graph below.)

The environmental havoc that antimony smelting can bestow is not to be underestimated, especially its effects on human health. That is why, in large part, supply constrictions have caused the price to rise. (To a smaller extent, the Chinese Lunar New Year celebrations affected the market in the short-term.) According to a Reuters report, the Chinese government began shutting down “small or illegal antimony smelters in the Hunan province last year as it bore down on stricter environmental cleanups and supply management. Evidently, “hundreds of illegal antimony smelters were shut down in the city of in late March last year. Smelting is the more of the culprit behind supply tightness the metal concentrate itself is extracted from stibnite ore, and is a byproduct of copper, lead and silver mining. (China produces about 90 percent of the world’s antimony; Lengshuijiang itself is responsible for 60 percent of global production.) 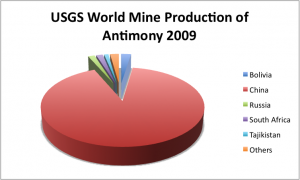 As my colleague Stuart Burns wrote last September, contaminated soil, air and water and high incidences of lung diseases and heart problems has put Lengshuijiang in Beijing’s cross-hairs; the city “has been declared one of 44 cities that are Ëœnatural-resource exhausted cities.’ As Stuart opined, this environmental crackdown could have forced a bit of demand decrease a good thing for Lengshuijiang citizens, if no one else as alternatives to antimony would be used.

However, back in January of this year, Reuters was reporting that a partial cause of supply constriction was increased consumer demand in European markets (which is surely not reflected in comparative GDP numbers; against slightly more robust annual rate increases in US and China throughout 2010, the European Union GDP posted the most lackluster percentage gains quarter-to-quarter.) Nonetheless, when paired with Chinese environmental restrictions, it’s easy to see why antimony prices are at historic highs.

The rare earths regulation frenzy has also affected antimony and other metals like it. China’s Ministry of Land and Resources recently announced the closure of 280 illegal mines, and reports show that 2010 licenses for “rare earths, tungsten, tin, and antimony fell to 116 from 400 in 11 provinces and regions in China, according to a Feb. 11 MineWeb article.

This, ultimately, is bad news for antimony buyers and consumers, as the metal’s applications are found in an increasing number of devices. Antimony is essential to make sure that the plastics used in computer casings and TVs don’t melt. But we are seeing certain indications that sky-high antimony prices can’t last. For example, China’s exports of the metal increased 13 percent in 2010. The key to tracking the metal’s forward-looking activity will be to keep an eye on how China’s environmental ministry is keeping the smelters in check.