Home | Commodities | Aluminum, Up or Down: An Intriguing Debate, Part One
Commentary, Market Analysis

Aluminum, Up or Down: An Intriguing Debate, Part One

An intriguing article in Reuters this week indirectly addressed the question that has absorbed many aluminum consumers this year —   should I be long or short? (or if not short, then buying hand-to-mouth in preparation for a price drop). The article approaches the topic from the direction of investors who have seen the copper price triple since December 2008 and the aluminum price double since early 2009. Lately however, copper prices have dropped back and yet aluminum prices have held relatively firm. Indeed, in the face of relatively lackluster buying of physical copper, aluminum premiums have remained firm, even reaching record highs of over $200 per ton in Europe this month.   The article rightly goes on to pour cold water on the suggestion that aluminum is the new copper and will benefit from substitution at the expense of copper. But the examination of whether the aluminum price will remain firm or fall remains an interesting one for anyone active in position-taking or exposed to price movements.

The chartists would have us believe the aluminum price shows all the symptoms of a metal due to run up to $2800 per ton, as this graph from Reuters purports to show. 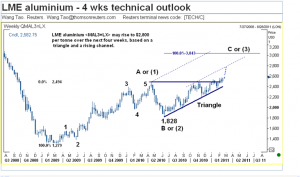 Sorry if I sound less than convinced. I am not a supporter of predicting price movements from charts, seeing it as analogous to reading tea leaves. However, I am aware that some do follow astrologers’ predictions and hence, prophecies can become self-fulfilling. I also accept that on occasion, chartists have correctly predicted price movements, but then so have I. In this case though, we would be staggered to see aluminum run up to $2800 per ton anytime soon, but we include the data as it is a potential driver.

Quoting from the article, according to the International Aluminum Institute, China produced 16.131 million tons of aluminum last year compared with 12.964 million tons in 2009. “China was effectively using cheap energy to produce aluminum and exporting it to the West,” said Julian Treger, fund manager at UK-based Audley Capital. “They will shut down some of their capacity and that will be bullish. They don’t want to export cheap energy to the West any more, they will cut back production.” China’s energy cannot be characterized as low-cost today, unlike the new Middle Eastern smelters with very low-cost gas supplies. Most of China’s aluminum smelting relies upon coal-powered electricity production or precious hydroelectric capacity, power desperately needed for more value-add industrial uses and for rapidly rising domestic consumption. Some 40+ percent of the cost of aluminum production in China comes down to electricity, compared to an average of 30 percent elsewhere. China truly exports high-cost aluminum in a low value form by exporting primary and lower value-add aluminum products. You can’t fault Beijing’s attempts to dissuade exporters of lower value aluminum products.

PREVIOUS POST:
USGS Mineral Report and Housing Trends Point to Uncertain 2011 For Construction
NEXT POST:
Aluminum, Up or Down: An Intriguing Debate, Part Two