Both Australia and Brazil are running close to capacity in meeting current Chinese demand. Indeed, part of the recent price spikes has been due to weather-related disruptions from those markets and a lack of alternate supply options. India, the third largest global seaborne IO supplier, has just announced a quadrupling of its export duty from 5 to 20 percent on iron ore fines, which makes up the majority of its exports to China. We don’t hold with R.K. Sharma, secretary general of the Federation of Indian Mineral Industries, and his statement in a Reuters article that “This will make the exports of (Indian) iron ore uncompetitive in the global market.” The Indian IO producers’ cost of production is way below the export price and they can absorb the tax increase, but it will certainly support current price levels and dissuade producers from chasing market weakness downwards. The other major constraint on Indian supplies is the impending arrival of the monsoon period in mid May. Last year an extended monsoon impacted shipments for some four months, and finally, Indian political machinations add uncertainty, with Karnataka, Orissa and Goa all experiencing various degrees of export blockades.

So the supply market remains constrained and yet the figures suggest demand is rising: 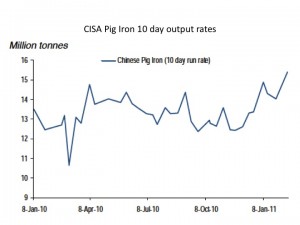 Global Pig Iron production is rising, as this graph from Credit Suisse shows, while within China, blast furnace capacity utilization has been rising since November and is currently at around 95 percent. With an end to Beijing imposed and weather-related electricity rationing, and the imminent onset of the Chinese peak demand period for the construction markets in March to May, the bank believes any current weakness in demand will be reversed in the second quarter. Nor does the bank hold that stocks are high; yes, in absolute terms they are higher, but so is consumption. The key measure is days of cover and on that basis cover is down from 32 days in late December to 29 now. 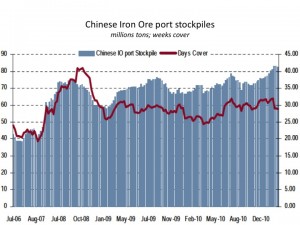 Lastly, PMI data has remained firmly positive from all the major industrial regions: North America, Europe and Asia for the whole of 2010 and even finally Japan in 2011, pointing to increased demand in spite of what may or may not happen in China.

The main risk to Credit Suisse’s bullish stance is a concern that the authorities may tighten credit too much, as they did in late 2007/early 2008. However, the bank has identified lead indicators that showed the impending crunch before trade began to be impacted. Peoples Bank of China’s rising borrowing costs in the first half of 2008 showed that companies were being starved of cash and monitoring of these indicators would provide timely evidence if the same problem is reoccurring in 2011. The balance of probabilities, the bank believes, is that sufficient credit is still available for continued strong expansion of the Chinese construction and manufacturing sectors, but insofar as risks exist, this is the measure to be watched.

So if the forward curves have it wrong and the price is going to rise again in Q2, just how far does the bank think it could go this year? Potentially as far as $250 per ton CFR China, the report says. While China is the world’s largest iron ore consumer by far and the price setter for the whole Asian market, price trends there are not happening in isolation to the rest of the world, as Cliffs Natural Resources’ recent record financial results show. Prices in all markets, even markets less reliant on spot pricing like North America, are ultimately driven by events in Asia. Let’s hope for steel makers and steel consumers that the bank has got it wrong.