A Review of Copper – Part One 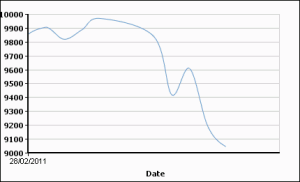 Since then, the market has come off a further 10 percent, as this graph of copper prices from the LME shows, and so we thought although it is only a couple of weeks since the last review, copper buyers may appreciate an update.

Since last month we have had the Chinese copper import figures for February. Reuters reports they have sunk 35.4 percent month on month over January, and although a fall was expected because of the Chinese New Year in February, the provisional figure of 235,469 metric tons was lower than expected and indeed the lowest since January 2009.

March figures are widely expected to be higher, but in a recent interview Andy Home of Reuters Metals Insider suggested there may not be as strong a bounceback as expected and it could be into the second quarter before imports begin to significantly pick up. As refined copper prices pick up, consumers often switch to scrap as the differential widens, but scrap imports were also down 30.6 percent from January and 10.7 percent from a year earlier.

One suggestion is that buyers are simply staying on the sidelines waiting for prices to fall, in which case one may expect warehouse stocks to show some signs of draw-down in preference to import, but bonded warehouse stocks in Shanghai and Guangdong have — if anything — increased, from 250,000-300,000 tons in December to 500,000 tons in early February and 600,000 tons plus in March. If correct, that equals the total amount of stock held by the world’s three main exchanges, the LME, the Shanghai Futures Exchange and COMEX, according to Reuters. Shanghai bonded stocks are at best an estimate because official figures are not recorded. However, sources in the market reported in the earlier article suggest some traders have been sitting on metal as it has risen, but are now having trouble extending credit and are looking to sell parcels. Indeed, Shanghai bonded stock prices are below LME prices with the LME-SHFE arbitrage window remaining firmly shut since late last year; the conclusion is demand is down domestically in China.

In February, bonded warehouse stocks were commanding a $10-20/ton premium, now they are at a similar discount. Bonded stocks are imports that are held in bonded warehouses and on which the 17 percent VAT has not been paid meaning they could be re-exported relatively easily if required. One measure of the strength of demand is local Asian market LME warehouse stocks, particularly in South Korea, the closest LME facility to Chinese ports. Rising stocks in South Korea have suggested metal is leaking out of the Chinese bonded warehouse market. Meanwhile, headline SHFE inventory, the Chinese equivalent of LME stocks, has also risen by 70,000 tons since October, according to an FT article.

PREVIOUS POST:
Where Metals Will Go As Japan's Economy Rebuilds
NEXT POST:
Score One For China in WTO Steel Anti-Dumping Ruling Against US