A Review of Copper – Part Two

It’s not just in China that signs of overheating in the copper market are manifesting themselves. On the LME, the forward three-month price was in backwardation for much of the 4th quarter in 2010 as prices rose relentlessly, but since the start of this year, the back dropped significantly and since March the market returned to a more normal contango reflecting easier, prompt availability of metal. 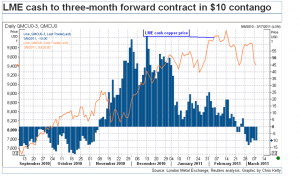 While the copper price has fallen, of course the oil price has risen and the two are not unrelated. The fear is rising oil prices will dampen industrial growth and economic recovery, and so depress copper demand. 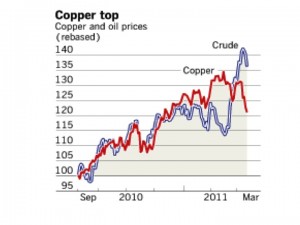 While the oil price was rising gently, it was seen as support for rising growth and hence copper consumption, but since the price has moved sharply higher on unrest in the Middle East, the copper price has taken a dive, as the above graph illustrates.

So does the above suggest that China has over-tightened and is in for a couple of quarters of low growth resulting in lackluster copper demand? Tonglin Non-Ferrous, China’s No. 2 copper producer, thinks not. Wei Jianghong, chairman of the group, is quoted in Reuters last week as saying, “Copper prices will stay high and volatile as a whole this year and are likely to hit a new record again…Consumption growth will not slow down from last year, as demand from copper wire and rods will rise, thanks to the government’s huge investment in building the rural power grid.” He did go on to suggest demand will not continue to grow dramatically, only that it will remain robust at current levels; but with large stocks, significant domestic production and a trend to scrap buying, that could still mean imports will remain subdued for some months to come. March and onwards is the traditional peak buying season for Chinese copper consumers and so either draw-down on domestic inventory or at the level of increase in imports, or both, will be keenly watched as a gauge of underlying demand.

The worst-case scenario for copper would be flat imports and rising exports, so for the first time in a long while analysts are watching both import and export numbers. Tonglin Non-Ferrous says it is running at 90 percent of capacity and is investing heavily this year to raise production. They are clearly bullish on domestic demand, but in an economy that has been growing at 10+ percent for the last five years, being otherwise must feel like swimming against the tide of history. Personally, we doubt the China demand story has run its course; demand will likely come back, but whether that is in March or later in the year remains to be seen. In the meantime, prices could fall further as there appears more bad news out there than good. Buying like Chinese consumers — hand-to-mouth — may be the order of the day for now.

PREVIOUS POST:
Cutting-Edge Aircraft Designs Hold Out Promise of Aluminum Use For Decades to Come – Part 2
NEXT POST:
(Yet Another) Case For and Against Gold