The major takeaways from a new report issued by the US Department of Energy (DOE) are that 1) the US steel industry can boast some of the lowest CO2 emissions in the world, but that 2) new technologies will still be needed to bring the CO2 emissions even lower to come in line with government mandates. But the whole story of the DOE report is only helpful if we use the US CO2 figures to look at the broader global context.

The gradual yet significant reduction in American steel’s CO2 emissions can mainly be attributed to the shift from OHF (open-hearth furnace) production to BOF (basic oxygen) and now EAF (electric arc) production; and the increased use of scrap. According to the report, EAFs accounted for 62 percent of US steel production in 2009. These trends have led to US steel reducing carbon emissions by 35 percent since 1990, making the industry’s CO2 intensity the second lowest in the world after Korea. But the most worrisome story is told in the following graphs, which look at both energy intensity (2.4) and CO2 intensity (2.5) as compared to percentage of steel made through EAF production in each respective country: 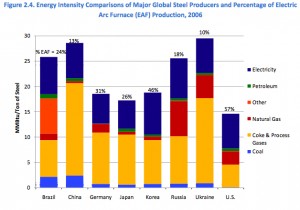 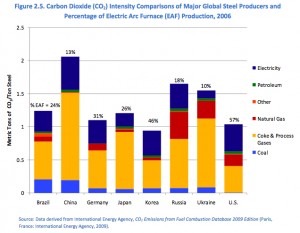 Clearly, the trouble in energy consumption and CO2 emission lies with China, Russia and Ukraine. The three nations have the lowest percentage of EAF mills. (Other sources outside the DOE put China’s percentage of EAF production closer to 5 percent, not 10 percent). The paltry energy efficiency in Ukraine and Russia is due to outdated equipment; but the combination of breakneck growth, laxer-than-standard environmental policies, voracious coal and iron ore consumption, and lion’s share of the steel producing market make China the force to be reckoned with when it comes to global, steel-related CO2 emissions. (Interestingly, India was left off the charts above, “because of an unknown data problem in the IEA data set, according to the DOE report. Hmm. I’m sure not all is green and clean in India either.) Consider that China accounted for 47 percent of total world steel production in 2009 — while the US was responsible only for 5 percent and it’s clear that the focus on emissions standards should squarely be placed on Beijing’s policies.

To put the relationship between power production and steelmaking into context, consider that 41 percent of global CO2 emissions came from generating electricity and heat in 2008, according to a separate report from the International Energy Agency. China, India and other emerging economies produce 69 to 94 percent of their electricity by burning coal. By 2030, demand for electricity will be almost twice as high as it was in 2009.

So, as China continues to lead the world in making steel, it will increasingly need to burn more fuel to do so, using more electricity, etc. etc. The majority of Chinese steel is still made with raw iron ore as opposed to scrap; very energy intensive. On the flipside, EAF production uses much more electricity than BOF. So once China’s percentage of EAF mills goes up, so will electricity consumption most of which is produced by coal combustion. Where to get to the bottom of all this? How to best pinpoint and execute emission reduction?

Ultimately, the pinpointing of emission sources and inputs is the biggest issue with this study or any study, for that matter. As the DOE outlines, the problems that arise in calculating emissions for the steel industry:

“Accounting challenges, such as the following, can occur across the entire system and skew study results:

The question then becomes, if we’re not 100 percent sure of how our emissions figures are derived or exactly how accurate they are, then how do we know which new technologies to tackle? And how effectively can the US government regulate the steel industry, let alone the governments of other nations? Check back in tomorrow for Part 2.