Tin: Where To Now?

Tin has been one of the wonder boys of recent months, powering up to over $32,000 per ton in the early part of the year, falling back briefly to $28,000 in March and then forging back up to over $31,000 while other superstars like copper have struggled. 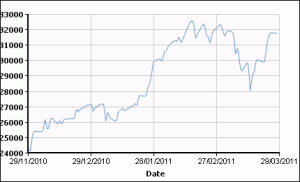 So what on earth are tin buyers meant to make of this — and can they expect prices to continue to rise this year? Many buyers are exposed to tin prices second-hand, by which I mean they consume tin plate where they are exposed to both steel and tin fluctuations and prices change annually or quarterly, not weekly or even monthly. Others, like solder consumers in the electronics industry, face price rises again, only periodically adjusted on a trailing average. The impact of recent price gains has yet to be felt and although consumers may have prudently been stockpiling excess inventory metal as they saw the spot price rise, sooner or later — probably sooner — revised higher prices will feed through.

The bulls would have it that tin prices have further to rise. Lars Steffensen, managing partner at Ebullio, told the Reuters Global Mining and Steel Summit that he listed tin as his hottest metal for higher prices, above copper, lead and zinc. “I don’t think (aluminum) is going to double from here, whereas I think there is a very good chance that tin could do, he is quoted as saying by Reuters. In a separate and earlier Reuters article he is again quoted as saying the metal could reach $50,000 a ton. “There is going to be less and less available. People will have to pay higher prices,” he added. “On the supply side you have output problems, (while) consumption is strong. On the supply side, he is referring to the two top producers China and Indonesia. China is a net importer even though the country is the world’s largest producer, so domestic production has failed to keep pace with rising demand while Indonesia’s PT Timah, the world’s biggest integrated tin miner, shipped only 40,413 tons of refined metal in 2010 down from 45,086 tons in 2009. Production has been hampered by bad weather, particularly heavy rains and a long running crackdown on illegal mining.

Production has little chance of rising from current levels in the next few years, new resources are limited and it will take some years to bring significant additional production online. So the main hope in capping prices is a slowdown in demand. So far, only the power problems following Japan’s earthquake and tsunami are expected to have any significant impact as it temporarily slows domestic electronics production and consumption. So far, China has not reported any slowdown due to the disaster, but time will tell if any meaningful disruption to the component supply chain hinders tin solder demand over coming months.

The only significant block to higher prices, apart from a global or at least Asian slowdown in demand, is a dropoff in investor appetite for the metal. Exchange open interest on the number of outstanding contracts on LME tin futures has risen to 20,795 lots, or 103,975 tons, from 15,992, or 79,960 tons, in early September when the latest price surge started. There are commodity trading funds and hedge funds that are sitting there long, and which will want to sell at some point, and their sales volumes are not going to be absorbed by the market in one go. The main risk to the downside is that China slows under the double drivers of Japanese supply and demand disruption and over-zealous Chinese domestic credit tightening. If those investors see exchange-traded stocks rising or import figures falling, there is the chance they will exit long positions and we could see a significant price correction to the downside. On the balance of evidence, however, it is not likely to be long lived.