With the automotive market receiving 24 percent of all steel shipments in 2010, according to the American Iron and Steel Institute (AISI), good news in auto industry production and sales can generally be interpreted as good news for steel. Even better news for a sagging US economy is hearing that domestic car sales are improving, and that’s exactly what’s happened last month and in the first three months of 2011.

Ford sold 5674 more units than GM in March, upending its rival in monthly sales for the first time since 1998. However, GM still holds the lead over Ford with 592,546 total vehicles sold in the first three months of 2011 to Ford’s 495,508. Some of the biggest percentage increases in March belonged to Chrysler (up 31%), Nissan (27%) and Kia (37%). And although small cars had the best showing in terms of sales in March (up 32 percent to 192,879 units, according to the Automotive News Data Center’s segmentation), the Smart Car plummeted 37 percent to post the biggest loss of any brand last month.

But March’s good fortunes may not last. Not surprisingly, Toyota posted the biggest drop with a 6 percent loss for the month. Japanese operations have been hard-hit following the March 11 earthquake and tsunami. The official company line indicated that it’s too early to predict “location and duration of supply interruptions, noting that many of its parts are sourced in North America.

But some independent analysts and American dealers tell a different story. A Scotia Economics report, for example, refutes Toyota’s claim above and asserts that global auto parts shortages will be the main reason for reduced production and, therefore, sales. “Japan is the world’s second-largest auto-parts exporter behind Germany, and hundreds of parts suppliers are located in northeastern Japan, near the epicenter of the earthquake, the report states. 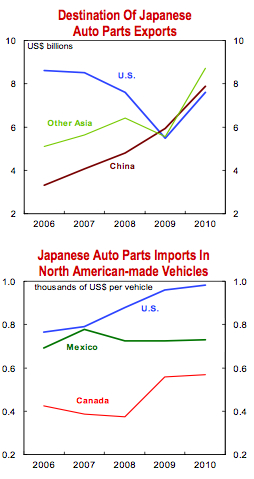 Since 2009, exports of Japanese auto parts factored heavily into US and other markets. US manufacturers will have to make up the difference, very likely through mid-summer. Source: Scotiabank Group

Eric Vates, general manager of a Chicago-area Mazda dealership, told Crain’s Chicago Business in a recent article, “Once you get into May and June, you’ll have dealers that are out of inventory or nearly out of inventory. A spokesman for Chicago Automobile Trade Association told Crain’s that, indeed, Japanese suppliers are telling US sellers to expect fewer cars in May.

What will this mean for steel? It could, in short, go either way. On the one hand, lower production in the short term could mean less steel demand, as auto manufacturers’ capacities are down; so steel prices would marginally follow. But on the other hand, in the longer term, if auto dealers’ inventories get decimated this summer, increased consumer demand will follow (if first-quarter sales are any indication), and once Japan’s parts suppliers and automakers get back online, they’ll be hungry for imported steel. Of course, let’s not forget emerging markets’ need for speed. Although China’s auto sales are not growing as quickly as they were a year ago, their auto market is still dominant.

According to a recent AISI report, 63 percent of the average vehicle is made of steel, with 57 percent of that being advanced high-strength steel (AHSS). With the auto sector as an important driver, steel demand — especially for AHSS, with more advanced grades on the way — in the second half of this year could certainly be something to watch.