On April 8, Cliffs Natural Resources announced “it has reached a negotiated settlement with ArcelorMittal USA Inc., and related parties, with respect to the companies’ previously disclosed arbitrations and litigation regarding, among other matters, price reopener entitlements for 2009 and 2010 and pellet nominations for 2010 and 2011, via this press release. In short, Cliffs will receive between $250 and $270 million from ArcelorMittal, in essence an acknowledgment that current spot market conditions justify Cliffs asking for a price adjustment. What we found most enlightening about the settlement involves the anticipated price realization for domestic iron ore. According to this post on Forbes, Cliffs’ revenue will have increased by about $8 per ton of iron ore pellets sold. That suggests Cliffs sells a little over 31 million tons of iron ore pellets annually. Yet their annual report says the company produced 26.2 million tons in North America (see chart below): 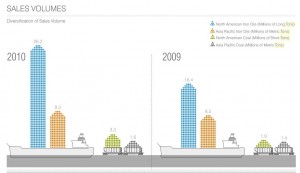 The interesting point involves the comparison of the iron ore market in North America and the iron ore market for the rest of the world — in particular, Asia. According to The Steel Index, 62% iron ore fines (arguably of lower quality than iron ore pellets from the USGS) CFR Tianjin were $181.50 as of April 15, yet the domestic market still appears more than 25 percent below the China spot market (we could argue more than 25 percent below the China spot market price if we compare apples to apples, which we did not).

All of this brings us to another point, one MetalMiner has repeatedly written about on these pages does pricing in Asia impact North American pricing? Our answer yes and no and it depends.

Are raw material input prices converging, or perhaps better said, do raw material input prices correlate to one another? Will these inputs eventually become fungible? My educated guess is yes, but we’d have to do some historical charting to test that hypothesis. Over time, that may become the case. I think what we find rather interesting about this settlement involves the current noted delta between North American iron ore prices and China CFR Tianjin prices. The delta still appears quite wide.

At nearly 40% of the cost to produce one ton of steel (assuming one includes both iron ore and iron ore transport), iron ore pricing alone gives North American producers an enormous cost advantage to their Chinese brethren.

Which begs the next question how can the Chinese continue to ship so much steel to the US? We’ll save that for another day.