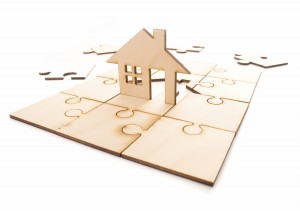 We’ve been hearing a lot of conflicting news on the construction front, so we thought we’d take a look at both consumer and commercial fundamentals that could be affecting steel, aluminum and copper demand, among other metals.

On the consumer side, housing demand at least for buyers is pretty dismal, if one is to believe a recent BusinessWeek piece:

“At the end of 2010, the fourth year of the housing collapse, the share of people who said a home was a safe investment dropped to 64 percent from 70 percent in the first quarter. The December figure was the lowest in a survey that goes back to 2003, when it was 83 percent.

Wow. So consumers don’t seem to be seeing the light at the end of the tunnel as far as buying is concerned.

But not so fast, argues Shawn Tully, senior editor-at-large at Fortune magazine, whose April 11 cover story tells readers to shun gold and forget about stocks because housing is showing a turnaround. “Two basic factors are laying the foundation for dramatic recovery in residential real estate. The first is the historic drop in new construction…The second is a steep decline in prices, on the order of 30% nationwide since 2006, and as much as 55% in the hardest-hit markets. But Tully also acknowledges the notable interest in renting. “The story of this downturn has been an astonishing flight from the traditional American approach of buying new houses to an embrace of renting, he writes. “But the new affordability will gradually lure Americans back to buying homes. And the return of the homeowner will start raising prices in many markets this year.

And more willing buyers and higher prices are obviously a good thing for builders and metal producers’ bottom lines, right? Not necessarily. Primary metals markets are not being stimulated when buyers snap up existing homes — the better indicator is new homes being built. Everything is connected, of course therefore the predicted increases in home sales (4.1 percent for 2011) relies on the availability of jobs, according to the Mortgage Bankers Association as quoted in BusinessWeek. So if the economy doesn’t grow out of the slump it’s in, buyers will likely keep renting. And if sentiment in home ownership keeps declining, then there may be less impetus for new construction.

However, consumer housing indicators overall seem to point to (gradual) recovery. Census figures show that housing starts are up 7.2 percent in March from a month earlier to 549,000 units, which is a quite a bounce-back from the 18.5 percent decrease in February, as reported by the National Association of Realtors. Single-family starts grew 7.7 percent, while multi-family starts were up 5.8 percent. 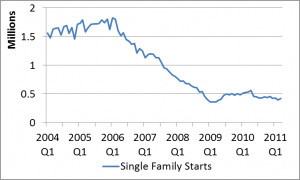 Tellingly, 422,000 single family starts were recorded in March, nearly 74 percent lower than in March 2006 (1.6 million starts) which may mean the constricted supply of newly built and existing homes could spur new demand, and with it, prices.

Check back in for Part Two to see how commercial construction is faring.