Home | Commodities | Iron Ore Demand Seen to Be Easing in Asia, So Where To Next?
Commentary, Market Analysis

Iron Ore Demand Seen to Be Easing in Asia, So Where To Next?

The iron ore price has been taken as a bellwether for the commodities super-cycle in recent years. Steel production in China has been at the core of that country’s growth story and the price of iron ore has been a major component driving steel costs across the rest of the industrial landscape. So as we read conflicting reports on China’s growth prospects, of the impact of bank reserve requirements and interest rate hikes, of falls in the country’s huge trade surplus numbers, it is pertinent to ask: where is iron ore going next?

Two recent reports to investors by leading banks contain slightly differing views, but both suggest prices will ease from Q1 peaks and will not test new highs this side of 2015. Credit Suisse can arguably be said to be closer than any to the iron ore market instrumental, as they were in getting the OTC iron ore swaps market off the ground. Credit Suisse’s reading is the market will likely weaken in the short term as Indian exports resume from Karnataka, but that the monsoons, predicted in about two weeks according to Reuters, will put a stop to the trade before it can really get underway in earnest. The bank states, however, that recent iron ore resource discoveries in China have been overblown, both in terms of the ease and the cost of extraction. In addition, expansion announcements by Rio and BHP will take a couple of years to be realized and are at a relatively high capital intensity, putting a floor under possible price falls. So much for the supply-side; on demand, Credit Suisse expects demand to recover later this year as the de-stocking evident by weaker iron ore demand in H1 runs its course and increased demand from mills tightens supply again. The bank does not give much credence to fears that the fight against inflation in China is going to impact steel demand dramatically. 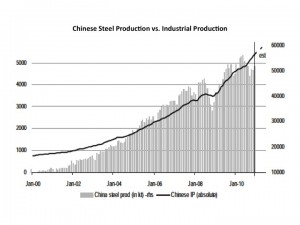 HSBC on the other hand says that while it anticipates Chinese demand growth for iron ore to continue, the bank expects it to moderate from record double digits in 2010 to just 6 percent in 2011, lower even than the 7 percent global growth predicted. This moderation in demand will not prevent the market from remaining tight, but the resumption of Indian shipments post-monsoon will ease supply sufficiently for prices to moderate and stay lower for the next two years. 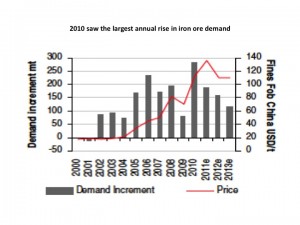 The following graph from HSBC illustrates the nature of the falloff in demand pressure and the impact the bank expects it to have on price.

As a result, Credit Suisse is sounding more bullish than HSBC and would probably consider the following graph (mapping out anticipated prices up to the middle of the decade) as being on the low side. 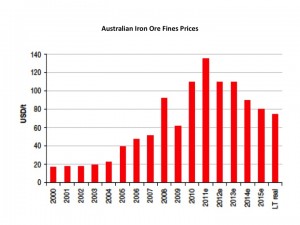 With the supply side remaining relatively constrained, both banks’ positions rely heavily on growth in China continuing, not just for major infrastructure projects which work to a longer time-frame but also for housing, white goods and autos driven more by consumer sentiment. However much the banks look at longer term historic trends in demand and in the tightness of the supply market, ultimately steel demand relies on a vibrant domestic economy — if that stutters, demand will too.

PREVIOUS POST:
Fortune 500 Shows Upward Trend for Industry into 2012
NEXT POST:
Iridium's Price Skyrocketing – What Does It Mean?