A series of recent FT articles covering a range of topics such as global growth, commodity market volatility and aluminum demand appear to offer conflicting guidance on the direction of prices for the light metal later this year and next. Aluminum’s price correlation to oil is an issue we have raised before in recent articles. As the oil price rose, the energy-intensive nature of aluminum’s production supported the metals price even as other metals such as copper and tin fell. In the last month, the price has fallen about 10 percent on the back of a falling oil price and strengthening dollar. (See aluminum and oil’s corresponding price drops below:) 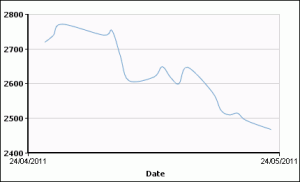 Gregory Meyer at the FT points to this correlation and suggests the falls are temporary, as surging Asian demand reduces OPEC’s once-comfortable cushion of 5 mb/d spare capacity touted at the turn of the year as being more than enough to ensure no oil shortages were on the horizon. Although oil prices have come off in a more risk-averse, Euro-crisis-fretting investment environment, the FT holds that demand is not slowing and yet the rate of new supply growth is. Sooner rather than later, this disconnect will resolve itself in rising prices again, creating support for aluminum. Even the IMF   supports this position in its economic outlook, saying oil prices are set to spike again as they did in 2008 and worries this could damage global growth.

One impact of high oil prices is how it fuels inflation. Although it has remained benign in the US, the end is in sight in Europe, with Euro interest rates likely to play to the booming German economy’s tune rather than the near-bankrupt Greek or Portuguese need for low borrowing costs. Inflation in Asia and other emerging market areas has been a feature of H2 2010 and H1 2011, and will likely get worse before it gets better. Aluminum inventories, after declining slightly in 2010, have returned to growth, suggesting supply is still outstripping demand. Now standing at over 4.7 million tons, LME inventories are at record highs. Supporters say we have been here before and the forward curve is proving resilient enough to support the ongoing finance of these stocks by banks and traders, but in a separate FT article, Max Layton, metals analyst at Macquarie, warns that when interest rates start to rise, 3 million to 4 million tons of aluminum could be released on to the market, triggering a price collapse. The finance deals on aluminum have remained robust in a prolonged low-interest-rate environment, but how they will fare as interest rates rise is open to conjecture — if the forward curve steepens, they could persevere; if it doesn’t, the only option is liquidation as rollover finance costs prove unsustainable. Max Layton forecasts prices will trade between $2,400 and $2,800 a ton until then, presumably the balance of this year, before diving as low as $2,000 in the first half of 2012.

Of course, it isn’t as simple as just interest rates and the oil price — if only it was. Chinese production is said to have a marginal cost of around $2,200-2,300 per ton. If prices were indeed to fall, as Layton suggests, large swaths of the Chinese production landscape could close down, forcing China to become a net importer and hence supporting the price by raising non-China demand. The balance here is probably the true cost of production in China, the level of which is not clear and obviously varies from producer to producer. Some capacity is becoming constrained by power shortages in China, but the impact isn’t severe at the moment and the cost of production is not the deciding factor for current closures; it is power supply. If anyone has more detailed advice on the true cost of production in China, I am sure readers would be keen to hear of it further. The numbers could be a key part of the supply-demand balance and hence the price we can expect to be paying next year.