Earlier this week, MetalMiner interviewed Dr. John Henke, President and CEO of Planning Perspectives, the world’s leading authority on buyer-supplier relations, according to their website.  The firm conducts an annual in-depth analysis of North American automotive OEMs and their Tier 1 suppliers. This year’s results, released last Monday, are a must read for any metal supplier to the automotive industry. Dr. Henke is also a Professor of Marketing at Oakland University in Rochester Michigan.

About the study: conducted annually, the study tracks supplier perceptions of working relations with their automaker customers, in which suppliers rank the OEMs across the six major purchasing groups, broken down into 14 commodity areas. The results of the study are used to calculate the Working Relations Index (WRI) based on 17 working relations variables. This year, 451 suppliers participated, representing 63% of the six automakers’ annual buy.

Key findings from the study: 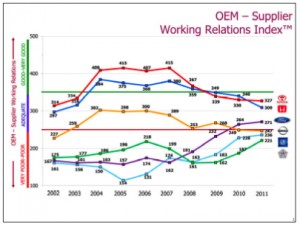 MetalMiner: From a metals perspective, I think our readers are most interested in the Body in White and exterior results. What are the key takeaways in terms of how metal suppliers view the OEMs?

John Henke: We only look at finished parts and in particular, 15 areas of parts. When we talk about Body in White we include the major metal components – stampings, castings, forgings, etc. With exteriors, it gets a little more complicated, but we essentially survey groups by how the purchasing departments are generally arranged within the OEMs.

MM: Why does Body in White consistently rank among the poorest performers?

JH: I don’t know. These suppliers are in a really tough place. There aren’t too many costs to take out and suppliers can be switched out “relatively easily. Switching costs are rather low. It’s a lot easier to switch metal suppliers than to switch power train suppliers, as an example. I suspect the OEMs can threaten metal suppliers more easily because their products are more commoditized. These suppliers need to create a competitive advantage so as not to be treated like a commodity.

MM: What do you think of this theory that commodity volatility has created more pressure for OEMs to manage costs in ongoing programs, therefore relations could be more strained as OEMs more frequently demand price concessions. Did the survey test for this?

JH: For the first time, we asked a question on that topic, specifically, “To what extent does the buyer you work with Ëœrelentlessly’ look for ways to reduce the price of the goods produced by your firm to a lower price? Survey results indicate that at least three OEMs did not score “low against that question. So we don’t see suppliers being hammered this way for Body in White and the same is true for exteriors. There seems to be nothing outstanding that seems to be driving the lower scores in Body in White.

Look for the conclusion of the interview tomorrow on Spend Matters, in which Dr. Henke weighs in on forward-looking approaches and building supplier trust.