July 4th Not Necessarily a Holiday for the US Steel Industry

Spend Matters, our sister site, penned a July 4 piece today examining a number of examples of offshore production moving back to US shores. We can’t think of anything more patriotic than that — however, we don’t think the US steel industry finds itself in a particularly patriotic mood.

The first example involves the San Francisco-Oakland Bay Bridge, as this recent New York Times article aptly titled the situation: “Bridge Comes to San Francisco with a Made-in-China Label“. The second example involves some shifts in imports for key steel products. Some of the import upticks coordinate with auto production (despite slow June sales numbers) along with key raw materials including slabs, billets and booms, but some of the largest percentage gainers include plate, tube, mechanical tubing, cold rolled sheet and line pipe.

First, we can’t resist making a few comments on the San Francisco Bay Bridge. We’d love to better understand the negotiation process and bid documents prepared for the State of California. The Times article references two points worthy of comment here. These points include the following:

But what we find particularly interesting (if not downright hypocritical) involves the way San Francisco (arguably a ‘green hub’) completely disregarded its own penchant for sustainability in deciding to outsource the lion share of the project (including all of the steel) to the Chinese. (Since most Chinese steel production comes via BOF production methods, we know the carbon footprint of sourcing from China would have well exceeded that same footprint in the US.) What’s good for the goose ought to be good for the gander, but not in this case.

Not to merely pick on China, other steel import trends also tell an interesting story. This month’s Steel Import Monitor highlights a few product categories with significant percentage (and volume) changes sure to raise a few eyebrows. In particular:

Clearly, energy markets have come alive in recent months, pitting imports against domestic producers. No example highlights this trend more than US imports of Korean plate: 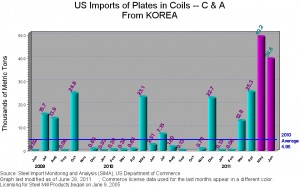 Will the domestic steel industry file an anti-dumping petition? We don’t know, but the chart above looks a bit out of whack to us. Stay tuned!