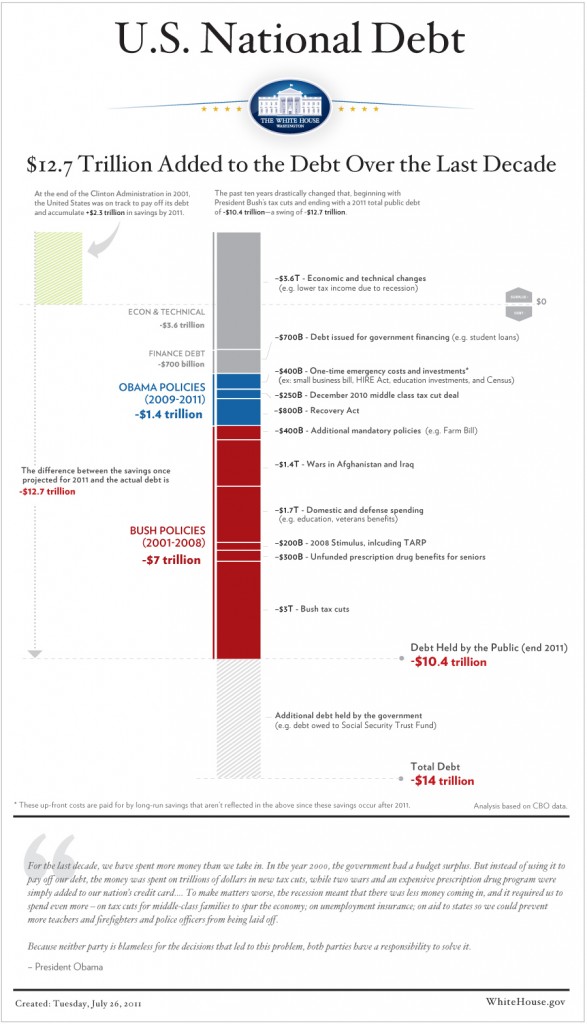 An overview of The Mess We’re In, released by the White House.

Regardless of whether Congress and the Obama administration resolved the debt-ceiling crisis this weekend (or if they did, what kind of deficit plan they agreed upon), there are a number of systemic issues at hand that could and likely will — get worse no matter what happens with debt ceiling increases or stopgap spending cuts.

Several industry organizations, such as the National Association of Manufacturers (NAM) have issued statements decrying the inaction in Washington, and rightfully so. However, it seems that the call to action put forth by NAM CEO Jay Timmons does not strike at the heart of the real solution to the country’s crisis.

“Manufacturers have consistently called on the White House and Congress to raise the debt ceiling to allow the federal government to meet its financial obligations and provide certainty for the country and the overall economy, Timmons said in the July 27 statement.

While a government default and a subsequent plummet of the US debt rating would certainly lead to abysmal results, we should be careful not to miss the larger point. The solution to raise the debt ceiling is only a temporary one, and one built on faulty conviction at best. Short-term economic certainty shouldn’t take the front seat over long-term, sustainable drawdown of US debt.

In essence, agreeing to raise the level of debt burden the country can carry is an artificial means of solving problems. So many tangible problems these days seem to be shunted off on onto “political solutions instead of sound, economic ones. While these may be “harder decisions or may require “greater sacrifice, as politicians like to say, they’re that much more necessary.

This is part of the reason that the argument for spending cuts is so convincing. Equally, there must be a viable plan in place for the government to (reasonably quickly) begin paying off (at least) the interest on its massive debt.

A key finding in a recent poll highlighted in a press release by the Alliance for American Manufacturing (AAM), “just 29% of more than 1,200 respondents “want Washington to focus on deficit reduction while 67% favor job creation when given an Ëœeither/or’ choice. The sticking point here is that there shouldn’t be an either/or choice; the two are inextricably linked.

To boot, the Economist recently bore some dispiriting news. It turns out that the Clinton surplus touted by Democrats in the recent decade never “really existed. Sure, on an annual budget basis, surpluses may have appeared, but at issue in the post is the fact that the Clinton administration forecast total debt payoff and an accumulation of $2.3 trillion in savings on top of that clearly didn’t come true. [As the graph drawn from Congressional Budget Office data shows at the top of this post, most of the debt in the 2000s can be attributed to Bush’s tax cuts and “economic and technical changes.]

This should teach us a lesson: both very short-term (annual budget) solutions and long-term multi-decade forecasts can hardly ever be counted on. The only feasible way forward is to realize that governments, all the way down to consumers, must adopt real austerity measures in countless aspects of their fiscal business. Let’s stop bleeding money overseas both in needless war and inefficient outsourcing and focus on returning to a self-sustaining state of economic solvency.

After all, we’re not Greece — there will be no EU or IMF to bail us out.

PREVIOUS POST:
Friday Satire: Health Benefits of Silver, Copper and Rhodium
NEXT POST:
Ferrochrome – Up or Down?