Why Do US Steel Producers Need to Pay Attention to Downstream Imports?

Historically speaking, MetalMiner has generated the most controversy or commentary on our stories involving steel imports and exports. Now, we have had a few exceptions to that rule (everyone seems to enjoy a scandal) and we receive lots of comments when we talk about cross-border ownership of steel mills and their labor unions, but the lion’s share of controversy centers on trade, specifically steel trade.

According to Wright, “Wire rod is the only long product segment that is totally aware of the downstream import threat. By ‘downstream threat,’ Wright refers to what happens to the domestic primary industry when key customer segments shift from domestic to foreign production. (The chart below depicts the situation.) In an interview with MetalMiner, Wright stated, “The whole wire rod market, domestic supply [plus imports in a good year (2006)] is six million tons, but as much as another five and a half million tons (2006) comes in as wire products, which means that both the wire rod producers and consumers have lost control of their market. 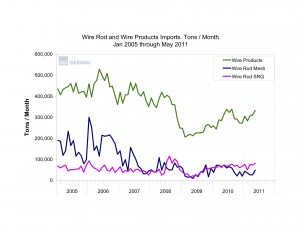 Wright’s main point — that upstream markets need to pay more attention to the threat of imports on the downstream (e.g. customer) side of the equation — could have wider ramifications than [only] for wire rod producers. He suggested two additional areas that steel producers might wish to watch closely: fabricated structural steel and forgings.

To clarify, the products to watch do not involve the actual imports of steel mill products per se, although those remain on the radar; the “watch areas include the downstream products for which domestic steel producers provide steel mill products. A new HTS code created in 2009 will help the industry better monitor imports for forgings. Right now though, not enough data exists to draw any conclusions as to whether or not forging imports have surged, according to Wright.

How big has the problem become? According to another producer we spoke with, “the problem could be substantial as the market is very fragile and any form of imports, either rod or downstream, could turn it down very quickly. How does this evidence stack up against all of the media attention paid to re-shoring activities (including our own coverage)?

Clearly, re-shoring hasn’t occurred across the board and despite the resiliency of the US manufacturing economy, not all industries have jumped onto that trend. Wright’s comments demonstrate why upstream producers need to pay attention to manufacturing trends within key customer segments. If they don’t, they could find themselves with a much smaller customer base.