If your A/C is a little slow, or you feel bored at your desk, spare a thought for poor Raja, sitting in his truck for the last four days outside Chennai Port Trust’s (ChPT) container depot, waiting to get his export container unloaded. (Meanwhile, it’s 95 degrees Fahrenheit and nearly as high a percentage of humidity.)

A fight on Friday night between a ChPT employee and a driver resulted in a flash strike by drivers and haulage owners that has now resulted in a 9-km queue as port activities ground to a halt. If he had access to a copy of the Hindu Times, Raja would have read what he probably already knew — that the dispute was a flash point to a problem that has been fermenting for months namely haulers’ grumbles about appalling infrastructure at one of India’s busiest ports. 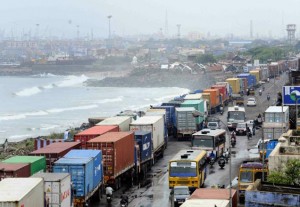 The strike is unorganized, which may mean it will fizzle out after a few more days, or the cause may be taken up by one of the truckers’ unions. Only one gate (Zero Gate) is allowed for movement of containers in and out of the port, according to the Hindu Business Times. This means every day, nearly 15,000 have to use this gate in the port’s northern side to move in or out the boxes.

According to the Hindu, it might take at least a week to clear the traffic congestion as DP World, the operators of Chennai Container Terminal, has been struggling for the last two months to clear the import boxes because of a flash strike called by the transport operators in June. This further action will exacerbate problems from Chennai for weeks to come, and if the aftermath of the June action is anything to go by, it could be Thanksgiving before shipments get back on schedule. So far, imported containers stacking up at the port have reached 13,400, an all-time high, and as a result no further incoming vessels are being allowed to berth until the dispute is resolved.

Anyone planning shipment out of Chennai may not have too many other options, as diverting shipments out of Mumbai or Kolkata involves a 1,000-mile journey that could take several weeks. If buyers have product shipping from Chennai, consider contingency plans; if parts are crucial, airfreight may be the only answer.

Meanwhile, poor Raja is still sitting in the queue, while local politicians and port operators have asked for three months to review the infrastructure problems and come up with a plan. Like Raja’s queue, I think we all know how slowly that’s going.

PREVIOUS POST:
When Offshoring, Solely Price-Based Decisions Are a Thing of the Past
NEXT POST:
Best Of MetalMiner: 10 Reasons To Short China