The Most At-Risk Metals

Much has been made — maybe too much — of the dire straits the world will shortly be in when the Chinese finally choke off supplies of rare earth metals, or elements (REE) to the outside world. No one would deny REEs have many critical uses, but you can’t help wondering if there aren’t a lot of vested interests behind some of the clamor. (For more MetalMiner coverage on rare earth elements/conflict minerals, click here and here.)

In the process, the supply side constraints on many other metals (with a few exceptions) are overlooked — until now, that is. The British Geological Survey has produced an intriguing report called the Risk List 2011. The analysis is, in their own words, intended to give a quick and simple indication of the relative risk to the supply of 52 chemical elements or element groups which we need to maintain our economy and lifestyle.

The list is much more than a simple list of rarity, REEs being a case in point; they are not rare, but the combination of relative abundance, location of deposits and concentration of production in certain countries makes them a much higher risk than metals that are rarer, but whose production is more widely distributed among politically reliable sources. Each element is given a score from 1.0 to 5.0 for each of the following criteria:

A score of 1 indicates a low risk, a score of 5 a high risk. The scores for each criterion are summed to give an overall risk to supply score obviously the larger the score, the greater the risk.

The lowest scores are (from the bottom up):

No major surprises there. Occurrence is plentiful and widely distributed, as is production. One may have expected to see titanium and chrome, both of which rely in part on supplies from Russia and South Africa, to have scored a little higher, but the report lists Australia and Canada as the leading producers for the first three and although China is listed as the leading producer for iron ore, they are also the leading consumer and a net importer.

Unfortunately, not so at the other end of the list. China comes out as the leading producer of 27 of the elements listed and ranks as the leading producer in six of the top nine most at-risk elements all of which are metals. The reason we chose nine instead of the top 10 is because items 10 and 11 are bromine and graphite respectively, but following these, the list promptly gets back into metals through the middle orders. 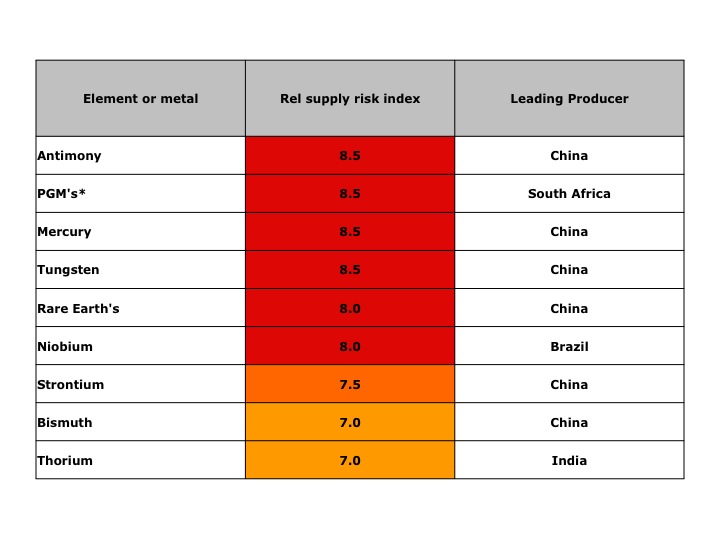 How often do we hear of supply risks to antimony, mercury or tungsten? Yet these metals are used in a bewildering array of applications. China produces nearly 90 percent of the world’s mined antimony and 85 percent of the world’s mined tungsten, according to the USGS. Arguably, tungsten is as critical as REEs, used as it is in a huge array of metal alloys for electrical, strength and wear resistant applications. Like REEs, China is restricting exports of tungsten and the BGS ranks the supply risks as even higher than REEs.

The purpose of the Risk List is not to cause alarm, but to alert policy makers and consumers to possible supply disruption in the future. As competition for resources grows, these metals currently present the highest risk due to geopolitics, resource nationalism (state control of production), strikes and natural disasters impacting a highly concentrated supply base. Metals buyers and product designers could do worse than spend a few minutes perusing this list and reflecting on their own raw material supply arrangements.