Home | Automotive | Aluminum in Cars At All-Time High – Alcoa, Novelis Taking It To The Bank, Part One
Commentary

Aluminum in Cars At All-Time High – Alcoa, Novelis Taking It To The Bank, Part One

The future for aluminum demand is looking pretty nice and shiny, if one is to believe the large number of stories and studies lately on aluminum’s role in the worldwide auto industry.

Alcoa is certainly betting on higher long-term auto demand, contrary to what some of the auto sector bears are predicting, by expanding an aluminum plant in Iowa geared toward flat rolled products for use in cars to the tune of $300 million and 150 new “permanent jobs, detailed in a recent Reuters story. (As Jon Stewart joked on the Daily Show last week in reference to Joe Biden’s praise of now-defunct Solyndra‘s creation of jobs: “No jobs are permanent. But that’s another post altogetherÂ¦)

The expansion wouldn’t be complete until 2013, which goes to show Alcoa’s optimism in the future global aluminum market, which is in part due to existing business it could be based on long-term production agreements such as Novelis‘ agreement to supply the metal for Range Rover’s new Evoque. Reuters quotes Helmut Wieser, Alcoa’s executive vice president and group president of Alcoa Global Rolled Products, as saying, “The automotive market has long lead times and much of this expansion we are announcing today is for business already secured. However, we see huge opportunity beyond this.

At least Alcoa and other aluminum operations have two things working for them (for now): recent auto sales numbers and new fuel efficiency standards. Recent sales on the whole look rather rosy, based on global numbers from German automotive industry association VDA; sales in China, Russia, the EU, Brazil and the US were up, while Japan’s and India’s declined.  As far as fuel efficiency goes, the Obama administration and the EPA are pushing harder every year for stricter standards, as the CAFE standard would rise from 35.5 in 2016 to a whopping 54.5 by 2025.

The backdrop for Alcoa and Novelis’ fortunes is a survey of North American carmakers released by Ducker Worldwide on Sept. 7 showing that the percentage of aluminum in cars is on pace to keep rising doubling from about 8 percent now to 16 percent by 2025. GM leads the North American market with 366 pounds per vehicle, and Honda is the overall leader with 10.7 percent of its cars’ curb weight comprising aluminum. The metal is already the primary in powertrains and wheels, and is “quickly gaining market share in hoods, trunks, doors and bumpers, according to the report. Additionally, “the average cost of direct weight savings is estimated to be approximately $2.00 per pound of weight saved not including cost savings from secondary weight reductions. Here’s a quick look at the breakdown of metals and materials in an average car: 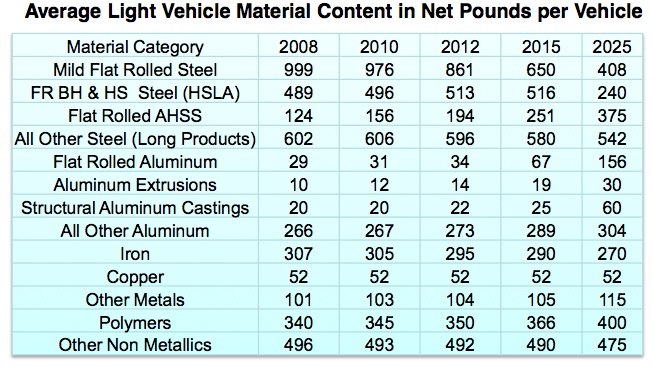 Graph source: Ducker Worldwide, Aluminum Association. An argument can be made that the rise in AHSS is simply coming out of the decline of galvanized steel per vehicle a wash for steel, in other words, in the Steel V. Aluminum Car Wars.

Other trends to consider, including a forward-looking view on aluminum prices, to be continued in Part Two.