Home | Green | Virgin Galactic Failing to Travel at the Speed of (Being Economically) Sound?
Commentary

Virgin Galactic Failing to Travel at the Speed of (Being Economically) Sound? 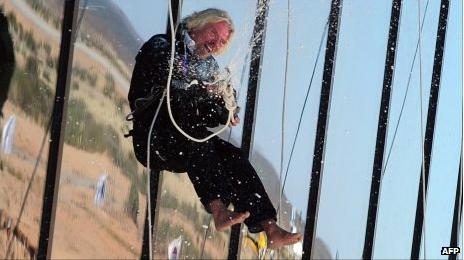 From this BBC story about Branson’s new spaceport (the headline of which was truncated on my smartphone, and I must admit, after I read it my first thought was that a spaceport had opened in Branson, Mo., the home of schlocky shows and Andy Williams), the photo above shows Branson “abseiling down the side of the world’s first built-from-scratch commercial spaceport, swigging from a bottle of champagne.

And why wouldn’t he? The guy who’s out to give the public rides into outer space at $200,000 a pop should be happy. After all, his outer space offshoot of Virgin Virgin Galactic has been pining for space flight for years. And now he’s got his first completed spaceport to show for it.

Or, perhaps it’s just the southern New Mexico heat getting to his head.

So what’s this got to do with metals? Well, our own Stuart Burns covered Branson’s space moves back in 2009, and the answer then, as it is now: not much. Stuart looked at the exclusively non-metallic aircraft, including the WhiteKnightTwo Virgin Mothership Eve, which is named after Branson’s mother. All the spaceships in the fleet are made almost entirely of carbon composite.

The 2009 post elicited an interesting comment from one “JD, who took issue with the ride’s price tag:

“as an engineer and designer i applaud the guys for accomplishing the buildÂ¦.but lets talk practicalityÂ¦.yep, i know, carbon fiber, nitrous, benzadrine, nitromethane, digital instrumentation, hiring qualified people, all those things COSTÂ¦but take a lesson from the innovators of the 60’s and 70’s who DEVELOPED the technology behind those systems of yours (the drag racers and car designers)Â¦.you can do it and do it SAFELY, and still do it cheaply.

Clearly, JD doesn’t realize that Branson profits from novelty and exclusivity there’s a backlog of eager, paid-up Ëœastronauts’ already. Who wants to do it “cheaply if you know you’re paying for the pizzazz?

All that aside, the New Mexico spaceport (not to mention potential future ones, which we’ll get to later) does involve metal.

Designed by British firm Foster + Partners, along with subcontractors URS Corp. and SMPC, the 110,152-square-foot terminal and hangar facility consists of “custom metal paneling and massive panes of glass, as well as tons of concrete for the 2-mile runway, according to BusinessWeek.

The firms were paid directly from the State of New Mexico’s coffers, as the $209 million price tag was paid courtesy of the taxpayers through a deal struck in 2005. As though the economic sense of commercial space travel doesn’t have enough problems, the Spaceport building underwent troubles of its own: “There were construction delays, building code problems, contractor disputes and costly change orders, Bloomberg reported. “State officials have blamed the unprecedented nature of the project as well as its remote location, the lack of infrastructure and the weather.

Doesn’t seem like a very sustainable or easily replicable endeavor. (Even though the building is basically built into the ground and therefore LEED-friendly.)

On that note, another metals angle appeared in a fascinating article in the Smithsonian’s Air and Space magazine. Branson’s preferred site for the first European Spaceport presents its own conundrums. The tiny Swedish town of Kiruna would be the port’s new home base under the “agreement of understanding the Swedish government came to with Virgin. Two major problems: Kiruna is home to a massive iron ore mine under the town; and at 90 miles above the Arctic Circle, it’s literally at the end of the earth.

Perhaps JD does have a point after all, at least as far as metals are concerned: you need to make the prospect of commercial space travel popular enough, thereby raising the demand for more spaceships, in turn raising the demand for a greater number of spaceports around the world, which will ultimately lead to greater metals demand for these structures. If we’re only going to see one spaceport built per continent every few years, well, there will truly be no reason to post follow-ups on this story on MetalMiner ever again!