China’s heavy metal appetite for the likes of lead, zinc, copper and other building blocks of construction and transportation has rendered much of its environment less-than-fit for human existence. All you need is a stroll down a Beijing street in the summer to realize that.

But this isn’t really news to any of us MetalMiner has consistently reported on the pollution concerns in China, and readers have likely long been aware that China’s emissions controls are not entirely up to Western standards (to put it mildly).

What is now finally making the mainstream news, however, is exactly how great a risk pollution from smelters/runoff/tailings poses to Chinese farmland and hence, to China’s agricultural sustainability. According to Reuters, nearly 10 percent of China’s 1.22 million square kilometers of farmland is polluted with the remnants of lead, zinc and other metal production.

Wan Bentai, the chief engineer of China’s Ministry of Environmental Protection, told Reuters about a “survey of soil pollutants that found 10 percent of farmland is essentially poisoned. For example, heavy metals have contaminated “7,150 square km of land, or roughly 3.4 percent of the total area in Hunan province, according to the China Daily. The news source also cites a study by the Ministry of Land and Resources in Hunan that pinpointed high levels of cadmium and other metals present in plant material within a 2500 square-kilometer belt next to the freshwater Dongting Lake, China’s second largest.

Fittingly, one of China’s non-Communist parties, Liaoning Provincial Committee of the Jiusan Society, came out with a report showing “that wastewater from a zinc plant and several lead mines has caused severe land pollution in the cities of Shenyang, Jinzhou and Huludao. Copper and chromium are among other culprits.

Of course, lead is arguably the biggest offender. China is the world’s largest consumer of refined lead, with battery making accounting for 70 percent, according to Reuters total lead consumption is estimated to grow to 4.1 million tons this year. China’s lead industry has already grown by 20 percent per year for the past five or six years. Wang Jingzhong, vice director of the China Battery Industry Association, has said China now has some 2,000 factories and 1,000 battery-recycling plants, making it a chaotic situation for regulators. “The chaos results from not having enough inspectors, not enforcing their findings and probably from widespread corruption among local administrators, inspectors and plant owners, according to my colleague Stuart.

This has disastrous consequences for the general public. Estimates of children affected by lead poisoning in China run into the millions. 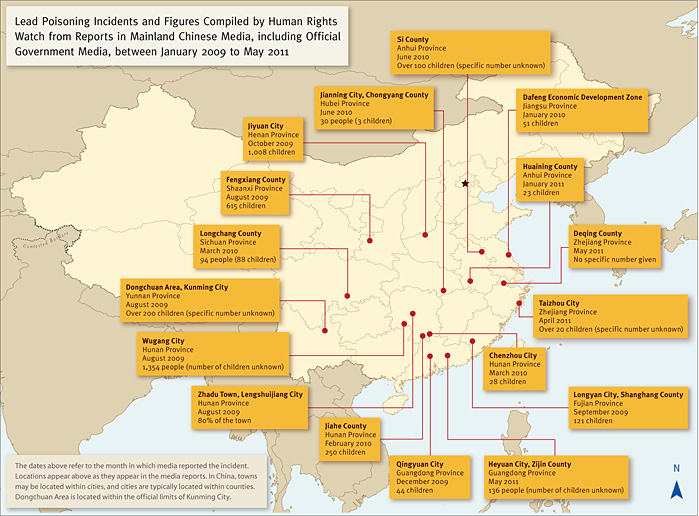 China’s Ministry of Environmental Protection has put out a plan to cut pollution by 15 percent by 2015 across at least 14 provinces and regions, according to China’s Xinhua news service. A total of 4,452 companies, including mines, smelters and battery manufacturers, have been put on a monitoring list. Reportedly, local officials “have been made accountable for the reduction targets, although that remains to be seen.

As for production and prices, China may have hit a point of no return. Perhaps no amount of capacity reductions, smelter shutdowns or new regulatory hand-slapping measures will be able to turn back the quality of the soiled farmland across that country. Even if lead and zinc smelter capacity were to be dialed down in the short term, reducing supply and raising prices, Beijing’s emphasis on growth over environment and, arguably, the general health of its citizens will do its part to continue shady oversight practices.

PREVIOUS POST:
Baltic Dry Index May Be Falling, But Not Because World Trade Is Down
NEXT POST:
Sourcing Large Infrastructure Projects: Lessons from the 2012 Olympics