Well, OK, maybe it hasn’t fallen that far. Although prices have come back down to earth (the LME spot price hovers at around $7,900/ton), mostly due to the Euro debt crisis, an interesting arbitrage story has developed between US traders and Chinese buyers.

Turns out traders are shipping copper cathode to China, because they can make money on Shanghai copper premiums, which are higher than those in the US or Europe, according to a recent Reuters report. China, meanwhile, is snapping up the primary metal because new regulations tied to the customs process have slowed copper scrap imports to a near halt, thereby forcing Chinese smelters to rely on imported primary copper.

The local China price for copper #2 scrap, for example, has been up and down in the mid-$7,000-per-metric-ton range over the last month, and currently stands at 49,100 yuan, or $7,736.51 per metric ton, according to MetalMiner IndX data. Grade A copper cathode prices, on the other hand, stood at $7,394.19 per metric ton at the end of October. Just check out the price drop since the end of last summer: 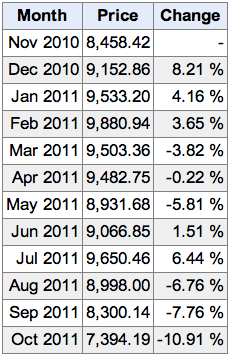 Evidently, the uptick in China’s copper imports is because of “tightness in scrap supply due to congestion at major ports as customs authorities clamp down on checks of scrap imports and ban import licenses from being transferred or sold following the introduction of a new policy, according to the Reuters article. That uptick plays no small part in the notable reduction of global copper inventories over the past several months, seen here in a Copper Journal graph: 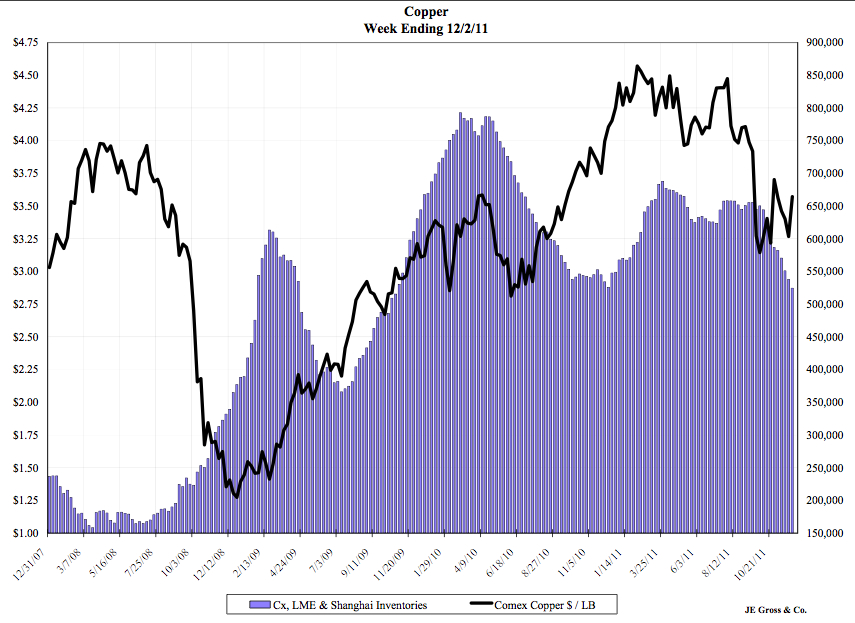 But others cautioned against thinking that China’s increased copper buying is all sunny news for the market. Reuters quoted a couple LME traders as saying that demand is still low, the tubing sector is doing poorly and inventories of autos, for example, are high. Also, China’s premiums are likely to go down — bad news for the US arbitrage players — but even worse, China’s demand is certain to dip ahead of the Chinese New Year, coming up in less than 2 months.

More food for thought on that front: The HSBC Purchasing Managers’ Index for China’s services sector fell to 52.5 from 54.1 in November, according to Reuters, “its slowest growth in three months. The service sector followed its bigger brother in China, manufacturing: “A Chinese manufacturing index was 49.0 in November compared with a previously reported 50.4 in October, the Beijing-based National Bureau of Statistics and the China Federation of Logistics and Purchasing said in a statement, Bloomberg reported on Dec. 1. (Remember, a figure below 50 indicates contraction.)

This begs the question: where is all this metal going if it’s not being used for immediate consumption? Well, we’ve written about it before, and it all revolves around one word — stockpiling. Since their usual scrap is not available, the Chinese are using just enough for their smelters while putting away enough primary metal for the future, in effect taking advantage of their own arbitrage opportunity as copper has fallen off considerably since the summer.

While the EU suffers under the weight of its debt crisis, and takes the rest of the developed world and its worried investors down with it, China is right there to try and reap the benefits. Just how long they’ll truly benefit, however, is anybody’s guess. Analysts of Simon Hunt‘s stripe foresaw copper prices as low as $6,100/ton by year-end, while others such as Jonathan Barratt, managing director at Commodity Broking Services in Sydney, is getting ready for “a strong Christmas rally in copper and sees the price going as high as $8,350. We’d say a middle ground between the two is much more likely.