Well well well, we should’ve seen this coming. Seems like just yesterday that MetalMiner covered Alcoa’s optimism on the future of the aluminum market — and the company’s stake in its success.

Now, with the global aluminum supply/demand balance out of whack in producers’ eyes — too much metal and not enough demand keeping prices down — Alcoa announced that they’re putting a sizable, permanent kibosh on their smelting operations. This comes on the heels of inventories spiking sharply just before 2012 began: 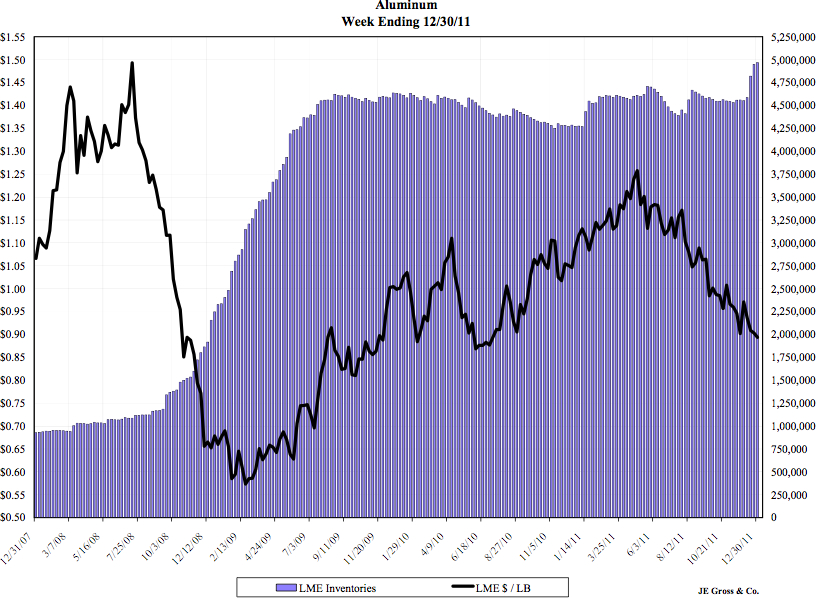 When all said and done, Alcoa will draw down its global smelting capacity by 12 percent. According to a Reuters article, that translates into 531,000 metric tons, and the closings of the Alcoa, Tenn., smelter (doubly sad, since the town was founded specifically for the company) and two of six smelters in Texas, which had already been idled.

Marginal costs of production are a big concern for aluminum producers (especially those in China), and with an excess of supply in the market, the flailing aluminum price in the past half year isn’t enough to keep most producers as profitable as they’d like. The gray metal hit $2,800/ton in May 2011, but has since come off around 30 percent, closer to $2,000/ton.

According to Reuters, many estimate that a quarter of global aluminum production isn’t sustainable at that that price. The FT reported that the US smelters Alcoa is closing are among the higher-cost plants in Alcoa’s portfolio, and the company has set a target of reaching the lowest 41 percent of the industry for aluminum production costs.â€

But will the cuts sufficiently help boost aluminum prices? That remains to be seen.

Chinese analysts have noted that since certain Chinese aluminum producers cut back smelting capacity two months ago, prices have not appreciated enough to write home about., according to a MarketWatch report. Yao Xizhi, chief aluminum analyst at Antaike in Beijing, was quoted as saying that other Western producers would have to make significant cuts before there’d be any sustainable increases in prices.

Also, many say that physical premiums will remain under pressureâ€ through Q1 due to stalling aluminum demand and high LME inventories. According to the article, Japanese premiums for the first quarter settled at $112-$113/ton, down from $118-119/ton in Q4 2011.

We’ll keep an eye out as the story develops.

PREVIOUS POST:
Titanic: Unsinkable? No. Unsellable? Hopefully Not.
NEXT POST:
Steel Price Outlook: Auto Production Fuels Demand For Now, But Is It Sustainable?