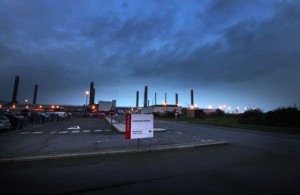 Back during the global market meltdown, it seemed as though every single metal producer announced line shutdowns or plant shutdowns. We all knew why, of course – demand had dried up like a raisin in the sun, or so the saying goes.

But with manufacturing demand healthy (and still growing according to numerous economic yardsticks, particularly in the US), US steel capacity in the upper 70-percent range, and despite some cautionary emerging market demand news from China, why would we hear so many stories of plant shutdowns and/or problematic restarts?

Though all energy-intensive industries pay very close attention to energy prices, aluminum producers seem to have taken a number of decisions in recent weeks as a direct result of domestic energy policies.

Take, for example, the closure this week of Rio Tinto’s Alcan’s Northumberland plant in the UK (pictured above). In a classic party debate between members of parliament (MPs), one side blames weak demand and overcapacity as the reason for the shutdown, whereas the other side blames “green taxes.”

For the record, Rio Tinto Alcan’s spokesperson gave the reason as, “Lynemouth smelter is already a high-cost operation and with increasing costs from environmental legislation and energy taxation on the horizon it is impossible to run the plant profitably in today’s market. Similar pressures are also being felt by other high-cost smelters around the world.”

We’d err on the side of Rio Tinto Alcan, in terms of the reason behind the closure. After all, despite slowing economic numbers within the UK and Europe, the economic outlook looked far grimmer back in 2008/2009, yet the plant didn’t shut down operations then. Instead, the decision likely came as a result of a carbon tax scheduled to go into effect in the UK in 2013, which will “add tens of millions to its costs, when it is already running at marginal profit,” according to this story.

Here in the US, a similar drama has unfolded for aluminum producer Century Aluminum with operations in Ravenswood, West Virginia. In this case, the state government intervened with a $20 million tax rebate program, which — though it will not directly go to Century Aluminum — will see the producer receive the benefits of the legislation in the form of lower electricity prices. According to a recent article, the Ravenswood facility, when fully operational, consumes 10 percent of the state’s electricity. Like Rio Tinto Alcan, Century officials have voiced similar concerns about EPA regulations:

“We expect that future electric power costs in the U.S. will present severe challenges to our domestic smelting operations,” company officials said in the annual earnings report to the US Securities and Exchange Commission.

In a follow-up piece, we’ll explore Alcoa’s announcement of a shutdown for a plant it operates in Milan and how energy policy directly impacts capital spending within the US.