Rio Tinto, Rusal, Vale Showcase Big Plans in 2012 and Beyond 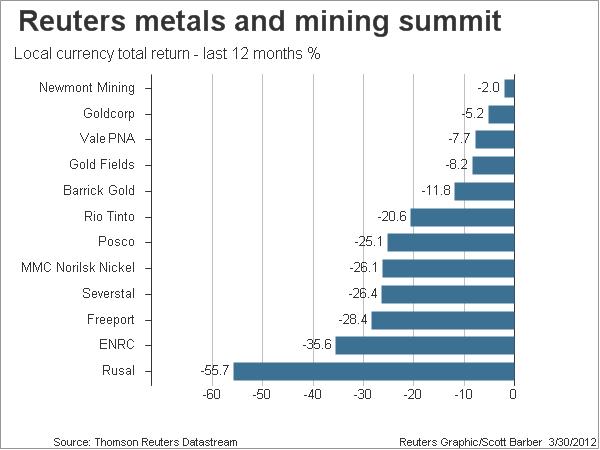 As the above graph shows, total percentage returns for the huge industrial metal and raw material producers, who’d attended last week’s Reuters Metals and Mining Summit, have not really been all that hot — indeed, rather cool to cold — over the past year. Sovereign debt concerns, cooler global industrial demand, strikes, natural disasters and declining ore grades all play a role in the current metals climate.

The summit serves as a platform for these companies to come together and prognosticate, and for reporters to relate what these guys say — whether there’s much to back it up or not. If anything, though, benchmarking market activity against companies’ words and predictions could have value.

In case you missed the day-to-day reporting, let’s touch on some important announcements and news nuggets, all originally reported by Reuters, that might affect industrial metals markets and metals prices in the next year (or two, or five…)

PREVIOUS POST:
Sand Flea Robot To Help US Military in Afghanistan
NEXT POST:
Lights Out for Rio Tinto Alcan Plant – What Plant Starts and Shutdowns Say About Energy Policy