Looking to be a little greener for Earth Day? Ride in an auto rickshaw (if you happen to be in India)!

These small vehicles offer a way to quickly duck and dash around other automobiles while being a little bit kinder to the environment. Generally characterized by a sheet metal body or an open frame resting on three wheels, auto rickshaws have a small cabin in the front of the vehicle for the driver, and seating space for up to three passengers in the rear. 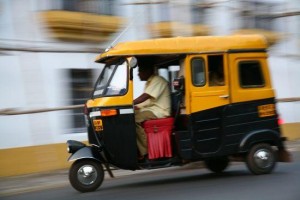 According to National Geographic, many years ago, Delhi began increasing their supply of auto rickshaws to support growing transport needs — requiring them to run on clean-burning natural gas to help solve pollution concerns. Unfortunately, while Delhi can now boast of one the world’s largest fleets of vehicles fueled with compressed natural gas, its transport needs are still great.

In fact, the stress of finding an available rickshaw at decent prices is driving many commuters to buy cars – adding to the already overwhelming number of private vehicles in the city. As the article notes, “Delhi alone has 11 percent of the nation’s private vehicles but just 1.4 percent of the population. Think tanks, city governments, and entrepreneurs say boosting auto rickshaw use could help reduce dependency on cars and improve air quality. But finding the right mix of policy and incentives has been a struggle, especially when many among the growing middle class in India consider car ownership a status symbol as much as a transport solution.”

The article further warns that things will get worse if the government does not act swiftly. Because, as the number of cars in India increases, so shall the air pollution. Did we mention that Delhi’s air is “rife with toxic particulates in concentrations five times higher than those deemed safe by the World Health Organization”?

It is obvious that measurements must be taken. So, what to do…

According to the article, Delhi has explored its options and is beginning a revamp. From “scaling up the public transport system of buses and commuter trains, [to] improving walking and cycling infrastructure, as well as making parking reforms and adding more transit-oriented development.” Delhi has high hopes that such changes will aid in their target goal of “80 percent of trips by public transportation by 2020, compared to about 40 percent today.”

Creating a stronger auto rickshaw strategy to go along with this effort would be a creative way to decrease the number of the private vehicles and road congestion.

If interested in the latest news regarding Delhi’s progress, check out the Delhi Integrated Multi-Modal Transit System (DIMTS) website.