Prices for Grain Oriented Electrical Steel (GOES) fell slightly (1 percent) from the previous month, with the index slipping from 253 to 250.

The GOES MMI® does not appear to follow the same pricing patterns taken by last month’s biggest MMI dippers such as the Copper MMI® and  the Stainless MMI®. That may have something to do with activity within the power construction market which, according to an earlier analysis on MetalMiner, drives GOES pricing, along with supply of raw materials: 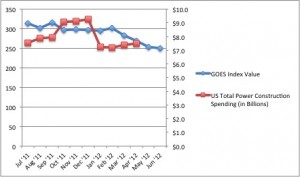 Although total US power spending declined during Q1 of this year, the numbers through April have held steady. And according to Reed Construction Data, power spending will continue to grow through 2013 which, if true, would provide strength on the demand side of the equation. For a historical comparison check out this graph, marking the same GOES index data against power construction spending: 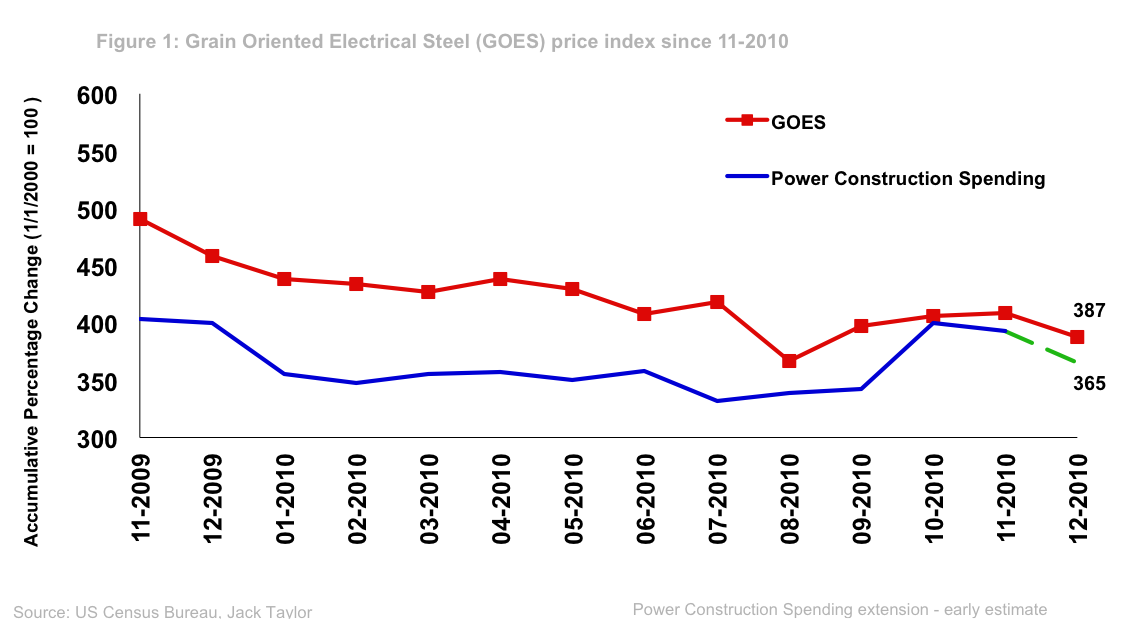 One of the key inputs of GOES involves hot rolled coil. Although scrap prices fell rather dramatically a couple of weeks ago, things have begun to stabilize on the scrap front. The forward curve for hot rolled coil suggests rising, not falling prices, but we haven’t seen steel prices plateau as of yet; that bottom may start to form during the next couple of weeks.

Does that mean now looks like a good time to buy? In falling or flat markets, we tend to say delay the buying decision until the last possible moment, but the second lead times start to extend, price increases will likely follow. Though the entire MMI® series for June fell, we can’t yet see if that looks like a single month of poor data, or will become part of a longer-term trend.

PREVIOUS POST:
Global Precious Metals MMI®: US Silver Falls Nearly 6% For The Week
NEXT POST:
Global GDP Forecast and How It Relates to Metal Prices