That amounts to about a tenth of global aluminum demand this year, according to the FT, yet only a fraction – 125,000 tons – is coming from Rusal itself. Rusal is a comparatively low-cost producer, yet is flirting with posting a loss for this year; published figures are muddied by write-downs on shareholdings in Norilsk Nickel and a reduction in the value of its bauxite facilities in Guinea.

Alcoa also reported a net loss for the second quarter, even though most of the firm’s profits come from higher value-add semi-finished products.

So are Rusal’s predictions of widespread closures pie in the sky, or are the long-awaited capacity cutbacks finally starting to happen?

An intriguing article by Andy Home of Reuters analyzes the premiums paid for physical aluminum deliveries and, in the process, weighs up the relative contribution made by the stock financing community and the metal consuming community. Firstly, the premiums.

As this graph from Reuters illustrates, the Japanese physical aluminum premium has never represented much more than 6 percent of the metal price as measured by the LME: 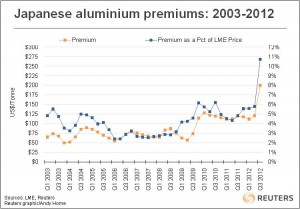 But recently it has shot up to 11 percent in the third quarter and on the basis of spot prices currently being paid in Asia, is likely to hit 14 percent or more by the fourth quarter.

Nor is Japan alone, as the following graph illustrates. All the physical premium markets – Asia, Europe and the North American Midwest premium are moving up and indeed are converging, suggesting they are all being driven by the same fundamental tussle between the investment community looking to tie up metal in long-term financing deals, and consumers looking to access metal for processing. 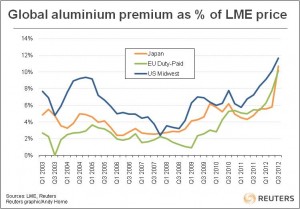 To gain a relative measure of the two, the article states that Japan buys about two million tons of aluminum a year, mostly on the spot market, making the country one of the single-biggest influences on the physical flow and pricing of the metal. This is why the Japanese quarterly premium has over time become a benchmark for physical premiums everywhere else in Asia.