Copper Price Forecast: Where Is This Supply Deficit?

Copper has been characterized for the last couple of years as, at best, a market in balance and about to tip into deficit.

Of all the base metals, copper’s supply market has appeared the most constrained and the case for price support has most consistently rested on demand growth hitting limited supply elasticity. 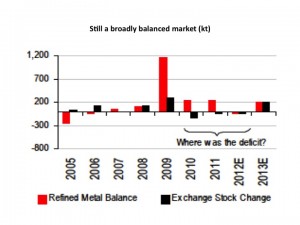 But as this chart from a recent Quarterly Metals Review by HSBC illustrates, the global market has not, as oft predicted, fallen into deficit in recent years.

Indeed, although exchange inventory is down by some 100,000 tons this year, much of this has simply shifted to higher inventories in China. HSBC estimates this year to show a 200,000-ton surplus, although this is down from an early estimate of 340,000, but is in stark contrast to the World Bureau of Metal Statistics which recently reported the January-to-August-2012 deficit as 299,000 tons.

The WBMS, though, makes it clear that no estimate is made of Chinese off-market inventory changes — and therein lays the difference.

The premise for a market squeeze by most commentators lay largely in the constrained supply market.

New projects were proving costly and challenging to bring on-stream, and just recently the falling copper price was undermining the economics of some projects. But HSBC sees much of the new supply coming from brownfield or existing mine expansion, not new greenfield developments, as the graph below depicts. 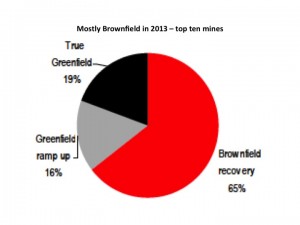 Broadly, the bank sees Grasberg, Escondida, and Collahuasi as collectively contributing the most, while full production at Los Broncos and Solobo should add additional supply. Fortunately, the contribution from true greenfield sites is limited, given the uncertainty in terms of timescale that surrounds developments like Oyu Tolgoi and Antapaccay.

So much for market balance; what does this tell us about future price direction?

If we don’t have a market in deficit, where are the support levels for the copper price, and should we be more relaxed about the prices we may face in 2013 and 2014?

HSBC correctly predicted the price recovery in Q3 this year, but sees some weakness towards year-end and into 2013. Price support in the form of increased stockpiling appears to kick in at around $6,500-7,000 per ton, creating a floor to the price.

PREVIOUS POST:
What Caterpillar Inc's Financial Results Tell Us About the Mining Industry
NEXT POST:
US Anti-Dumping Duty to Hit Small Steel-Pipe Manufacturers in India