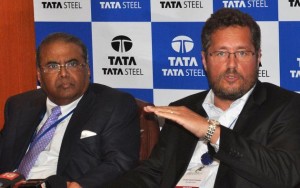 Pole-vaulting into the Top 10 list of global steelmakers after acquiring the Anglo-Dutch steel maker, the Corus Group, in 2007, Tata Steel, India’s largest private steel manufacturer, has grown exponentially in the last few years — but now finds the growth being partially stymied by conditions outside its grasp.

Tata Steel’s European business, which sums up about two-thirds of the company’s overall operations, is now proving to be its bugbear. Those within Tata Steel, though, are optimistic that it’s a temporary one.

A debt-ridden Europe has shown hardly any signs of emerging from its morass this year. A ‘zilch’ economy means ‘zilch’ growth, which means no one out there is buying steel, a metal considered to be one of the indicators of a happy economy.

But Tata has decided to fight this one out. Or wait it out. Put it anyway you want — but if media reports and the company’s periodic announcements over the last year are anything to go by, the company has decided to adopt a “cold as steel” approach to tackle the crisis.

Just a few days ago, it announced that it would invest in excess of approximately 1.5 billion pounds sterling in its European operations till 2015-16 to spruce up its existing equipment and bring out new products. The European operations, incidentally, contribute 66 percent to the company’s overall steel production capacity on an annual basis.

Making the announcement, Tata Steel’s European CEO and Managing Director Karl-Ulrich Kohler, on an India visit in mid-October, told reporters there that the fresh funds will go into buying equipment (capital expenditure), and the development of new products, among other things.

‘New product capabilities’ is an interesting play on words, but the CEO would not say more.

For the short term, the steel producer has already said it planned to invest 400 million pounds in the European operation during the current financial year to improve the performance. That coupled with some “hard decisions,” like laying off staff, which is what the company is banking on for the short term to ride out “the European crisis.”

Towards the end of 2011, faced with lower-than-expected quarter performance, it was Kohler himself, who had said that the company, rather than wait for conditions in Europe to improve, would start “selling everywhere.”

The strategy became clearer this year.

Tata has decided to re-focus on its India operations, and at the same time, has given additional thrust to more exports particularly to the North African regions, the Mediterranean area and Africa, in order to compensate for the shortfall in Europe. The company’s larger production facilities include those in India, the United Kingdom, the Netherlands, China, Australia and Singapore.

According to one report in The Financial, Tata Steel was expected to give clear examples of how it delivers increased product performance and value in use at EuroBLECH, the world’s largest exhibition for the sheet metal industry, which began on Oct. 23.

Here, Tata Steel is showcasing ultra-high-strength and other advanced steels for light-weighting steel car components that can reduce end-product weight by up to 35 percent and cut life cycle emissions by nearly 70 percent.

The company will also be launching two new pre-finished steels that can save up to 12 percent of production costs, compared to post-painted products.

PREVIOUS POST:
316 Stainless Steel Price Down, Nickel Spot Price Drops Too
NEXT POST:
US GDP Growth Could Be Good News for Automakers as Palladium Price Drops