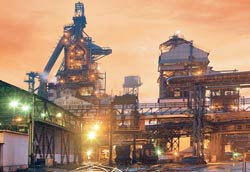 On Oct. 10 this year, Tata Steel also announced an investment of €12 million in new manufacturing facilities in IJmuiden, the Netherlands, in a bid to enhance production of specialized corrosion-resistant steel. It was also building a finishing line for hot-dipped galvanized steel, used in car body panels. This will become operational in 2014.

The investment, according to Tata Steel officials, was part of ‘The Best Steel for Tomorrow’ program, which will help the company become one of the world’s leading steel producers by investing, growing and cutting costs.

As part of its overall strategy, Tata Steel has decided to look within.

The steel company has decided to strengthen its domestic operations to beat the slowdown in Europe. It now plans to double the production capacity at its existing Jamshedpur plant to 10 million tons and focus on the 6 million-ton-per-year capacity greenfield steel plant at Kalinganagar in Orissa, to be built in two phases.

Tata Steel’s chief financial officer had told the newspaper Mint that as of now, the company plans to focus on its expansion plans in India. Tata Steel also plans to set up a 12 million-ton-per-year project in Seraikela, Jharkhand, North India, but the project is awaiting clearance from the state government.

The company has tweaked its raw material strategy to partially counter the price volatility. It began coal shipments from its Benga mines project in Mozambique. It expects to ship 850,000 tons of coking coal and 200,000 tons of thermal coal 2013 for its European operations. Tata Steel holds a 35% stake in the Benga project, while Riversdale Mining Ltd, which is now nearly 100%-owned by Rio Tinto, holds the rest.

The Indian steelmaker also holds an 80% stake in Tata Steel Minerals Canada Ltd, a joint venture with New Millennium Iron Corp of Calgary. In mid-October, it started production. Plans are afoot to boost production to 6 million tons a year by 2015. By the end of 2012, the output is expected to total 300,000 tons. In 2013 it will be 2 million tons, and in 2014, 4.2 million tons of sinter and super fines.

The question now is this: is the company’s actionable plan something that will see it through the difficult times with the least amount of pain?

The target is the long-term; though for the short-term, analysts in India do not see much hope because they do not expect market conditions to change much. They expect global steel prices to continue going south, and a bare amount of stabilization in Indian markets.

With no signs of any recovery coming from Europe, Tata Steel may well have to bunker down for another year of European freeze, and hope that the warmth of an Indian summer may bring a measure of relief from the chill.