I always find it so ironic when I come across a story that seems so incredulous to an industry insider, yet so tremendously attractive to those on the outside.

Take, for example, the move by Big River Steel LLC to establish a $1.1b steel plant near Osceola in Arkansas’ Mississippi County that will hire 525 workers at an average salary of $75,000 a year, according to all press accounts that we have read.

(Of course, if I had a job in the Arkansas State Legislature or led the state’s Economic Development Office, that would sound pretty attractive to me too.)

But US steel industry insiders have to scratch their heads. Let’s take a look at the following facts – and takeaways – regarding the US steel market. 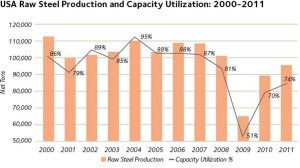 Takeaway: Add capacity when the industry is at or near capacity. But the industry hasn’t touched peak capacity levels since 2007 and some don’t even consider 85% capacity utilization as “full capacity.”

2. ThyssenKrupp, a venerable steel producer, has a fire sale going on right now for its $11.8b plants in Alabama – bids have come in as low as $1.5 billion.

Takeaway: Why did ThyssenKrupp decide to sell its plants? MetalMiner has written extensively on that, but let’s leave it to cost over-runs, tremendous debt and less-than-stellar steel demand.

3. Location matters when it comes to sourcing steel.

Can you sense a trend? For the takeaway and our ultimate conclusion, read Part Two.