If Germany, Other EU Nations Had a Do-Over, They'd Avoid Euro

In Part One, we began looking at the decline in interest-rate spreads between sovereign bonds of vulnerable countries and German Bunds.

Moving to GDP, in the fourth quarter of last year, Eurozone aggregate gross domestic product was still 3 percent below its pre-crisis peak, while US GDP was 2.4 percent above it.

In the same period, Italian GDP was at levels last seen in 2000 and at 7.6 percent below its pre-crisis peak. 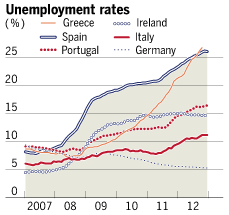 Spain’s GDP was 6.3 percent below the pre-crisis peak, while its unemployment rate had reached 26 percent. All the crisis-hit economies, save for Ireland’s (which has been stagnant), have been in decline for years. 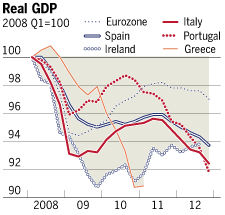 Even Germany’s GDP was only 1.4 percent above the pre-crisis peak. So when growth returns it could be a decade before economies get back to where they were pre-crisis.

Back to the FT’s take, suppose the Spanish and Italian economies started to grow at 1.5 percent a year, which is doubtful for several years to come – it would still take until 2017 or 2018 before they returned to pre-crisis peaks.

If growth is delayed for a year or two – or is slower – it will be the next decade before they get back to the levels of the last decade.

How Long Are Societies Going to Put Up With This?

Like the slow-boiling frog, none of them, not even Germany, would opt to enter the Euro today if presented with the option, and none of them would elect to put up with the slow grinding deterioration in their standard of living, both current and projected into the future, that they are undergoing now.

Will they wake up and react before the frog is boiled to death? Don’t assume the tale is fully told – more EU installments are certainly on the way.