The future of domestic demand in China owes much to infrastructure projects, particularly compared to consumption in Western economies, as the following graphs illustrate only too well: 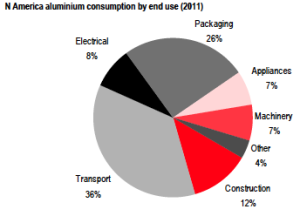 In North America consumption is driven by transport, such as automotive and aerospace, and, as you would expect in a mature consumer-driven economy, by packaging. But in China, demand is driven by construction, with transport playing a lesser role and packaging down in single figures: 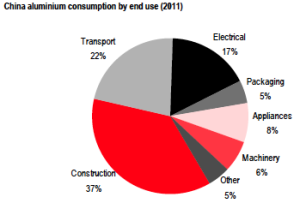 Chinese demand therefore has the potential to be more volatile, suggesting that should infrastructure spending slow, all that aluminum capacity may need to go looking for new markets.

Meanwhile, while global aluminum demand is growing, production is growing faster. Although it would not take a revolution in the rate of global demand growth to fix the structural surplus in aluminum, HSBC believes the cumulative 2012-2016 surplus will be 5.9 million tons.

The bank calculates global demand growth of 6.2% CAGR will absorb this excess and the market could be brought back into balance in one good year of demand, but the difficulty is that to absorb excess inventories, demand will need to grow sustainably at closer to 8% globally – more than double the CAGR from 2007-2012.

Surplus is looking inevitable this year and next; the only question is how large. While banks and trade houses soak up the surplus in financing deals, physical

aluminum premiums will remain high and the price will trade within current ranges, but as Reuters concludes, the consistent year-on-year accumulation of surplus metal is a ticking time bomb for the aluminum market – that it will end in tears is as predictable as this year’s market surplus.

It is only the timing that is open to question.