With the exception of a few premium brand producers like BMW and Jaguar Land Rover, European carmakers are having a pretty torrid time of things.

Rising unemployment and stagnant growth, if not outright recession in many European countries, are depressing new auto sales and adding to the capacity overhang that has dogged the market for years.

New passenger car registrations in the EU fell 10.5 percent in February compared with the prior year, according to the ACEA industry association quoted in an FT article.

Apart from the UK, where sales rose 8 percent, sales declined across the continent’s major markets, down 10 percent in Spain, 10.5 percent in Germany and 17 percent in Italy.

According to the FT, some of the biggest declines were registered at Ford and General Motors – both down 21 percent – and Fiat and PSA Peugeot Citroën, down 16 percent and 13 percent respectively. 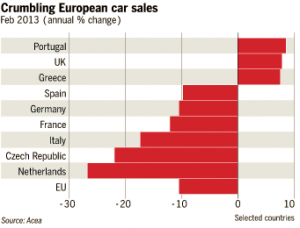 In contrast, sales at Honda rose 21 percent and at Hyundai, 2 percent with BMW, the largest global premium brand carmaker, posting another record year (up 9 percent in the third quarter), helped by a massive 39 percent rise in China.

Even BMW, though, are warning 2013 will likely not see any growth overall as Europe weighs on auto sales across the spectrum.

The continuing decline in car sales will have a knock-on effect for platinum producers. Platinum group metals (PGM) are used in auto-catalysts around the world but, given the higher proportion of diesel cars in Europe, this points to a weaker outlook for platinum over palladium.

The markets agree, with net speculative length increasing for palladium futures, but falling for platinum. ETF holdings have remained relatively stable for platinum, but there is clearly no appetite for an increase in holdings. Meanwhile, with demand looking to slow in North America and China and fall in Europe, the markets are looking to the supply side for balance with Amplats negotiations with government and unions later this month of more than passing interest.

The major PGM producer is looking to close shafts and lay off workers due to rising production costs and weak demand, but is facing resistance from both the government and the unions.

Even if the cutbacks are scaled back, industrial action in the form of strikes may prove of limited support to the metal price.

PREVIOUS POST:
India's Kerala to Get a New Plant for Rare Earths Production
NEXT POST:
Small Drift for 3-Month Price of Copper