Some investors are still feeling bullish about precious metals in general – and about silver in particular.

Moneymorning.com has called for higher silver prices this week on the back of soaring investment demand. Pointing to strong investor demand for the American Eagle coins, the article says bullion demand is strong, and while 2012 sales weren’t as high as 2011, buying picked up in earnest in the final months of the year as investors raced to protect their nest eggs amid fears of a U.S. recession.

As the pace picked up, the Mint ran out of silver Eagles in December 2012, forcing it to announce there would no more coins until 2013. 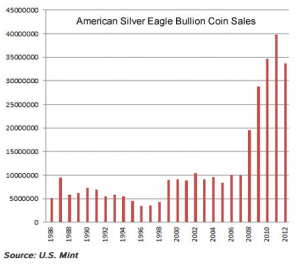 This chart taken from US Mint data shows sales up to last year, but this year has been even stronger, the article reports, as sales of the 2013 American Eagle silver bullion coins that went on sale to the public on Jan. 7 sold out by Jan. 15.

The US aside, though, silver has been characterized more by rising inventory, particularly in China – the source of much of the rise in physical demand over recent years. Up to 2010, China was a net exporter of silver, but since then China has imported substantial monthly quantities, contributing to rising inventories in the country currently as high as 18 months of fabrication demand, up from 16 months at the start of 2012 and only 4 months in 2009, according to a report by Standard Bank.

The bank states in a note to investors that in 2009, China was still a net exporter of silver. Due to changes in export tax rebates and demand growth, China turned net importer of the metal in 2010. During 2010 the country imported an average of 298 metric tons per month.

In addition, China added another 288 metric tons per month of silver from mine supply and scrap, leaving the total monthly supply of metal at 586 tons in 2010. In contrast, China’s average monthly fabrication demand in 2010 was only 330 tons per month, implying, in the bank’s estimation, a monthly surplus of 256 tons per month in the local Chinese market during that year.

The bank suggests that this has been taken either by investment demand or stockpiled by fabricators, but even though China’s imports have slowed from 298 tons per month in 2010 to 166 tons per month in 2012, the decline in imports was still not enough to stop the rise in metal within China.

Even if China doesn’t reverse the tax breaks and the metal stays in China, rather than be exported, the slowdown in Chinese imports that will come with inventory build will have a depressing effect on a well-supplied global market.

ETFs seem to be seeing the same picture, according to Resource Investing News. ETF investors have been loyal supporters of silver, buying and holding the metal despite its price weakness and the negative sentiment reflected in the futures market. But last week, it appears some investors’ confidence may have wavered as holdings dropped by nearly 80 metric tons, either following or leading futures investors as Comex holdings also dropped.

Apparently last week’s Commitment of Traders report shows that speculative shorts added over 530 metric tons. Shorts are now at three times the five-year average, a bearish signal if ever there was one.

Several analysts are suggesting silver could be at $26.50 or so in the near term, with weakness in gold only hastening the probable fall.

PREVIOUS POST:
Rare Earths Price Index Hits All-Time Low – But Be Careful How You Slice It
NEXT POST:
Aluminum MMI®: Cash Price of Primary Indian Aluminum Falls for Fourth Week in a Row